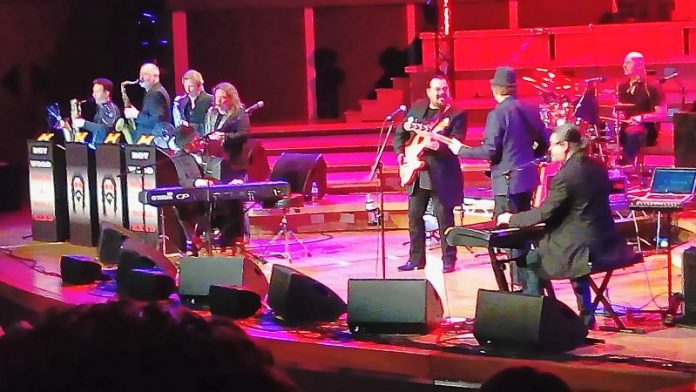 Damian (and Andy – but Andy hates Christmas so left this review to someone else…..) see if Roy Wood plays that song at the height of the festive season . Spoiler alert: he does.

Yeah it’s that time of year once again.

Time to get out those dodgy snowman and elf jumpers and Santa hats for its Roy wood’s annual hometown Christmas bash.

The wonderful Symphony Hall is the venue and first up tonight is the very talented Andy Fairweather Low. The older gig goers will remember him from his time with the late sixties pop band Amen Corner, solo and as a go to guitarist for, well who hasn’t he played with?

Most notable of these rock legends being Eric Clapton and Roger Waters. Mr Low is joined by Low Rider regulars Nick Pentelow on sax and Dave Bronze on bass with a stand in drummer, whose name I unfortunately missed. I have seen Mr Low numerous times as a hired hand but never solo so I was quite looking forward to this show. This turned out to be a most enjoyable set with a range of tracks highlighting the virtuoso talents of the artist and the band with a cover of “Route 66” in a Keith Richard style, an instrumental section covering the Latin flavoured Champs “Tequila”, Duane Eddy covered “Peter Gunn” and The Shadows “Apache” before the Amen Corner hit “Bend Me, Shape Me” and his 1976 solo hit “Wide Eyed and Legless” are shared. The short set is concluded with (If Paradise Is) Half As Nice with the audience joining in.

Following on from a short interval, musician, comedian and actor Kev Orkian joins us and after a little stand up. Performs a wonderfully comedic version of Elton John’s “I’m Still Standing.” He follows this with comedy skits of the song “Happy Birthday” performed in the style of Mozart, Beethoven and Strauss. A brief but extremely enjoyable humorous musical interlude.

The newish “New York City” is sandwiched between the Move classics of “Fire Brigade” and “I Can Hear The Grass Grow.” The hits keep coming with Wizard’s wonderful “Angel Fingers” and “Are You Ready To Rock” where we get a mixture of two local pipe bands joining the stage to drum and pipe along to this tune before exiting, whist playing a rousing version of “Flower of Scotland” The band continue with the superb Wizard tune “See My Baby Jive” before calling for tonight’s special guests to join them on stage. The ever popular Chas & Dave stroll on stage to rapturous applause. The boys share four numbers with the Brilliant “Rabbit” and “Isn’t No Pleasing You” amongst them before heading off again.

The enchanting Enigma Strings arrive on stage and start off a double whammy of Move hits in the guise of “Flowers In The Rain” and “Blackberry Way” The show has ended, but as Mr Wood says, he can’t be arsed to get off the stage to come back on so he hollers for Chas & Dave to return and they all launch into the final song that a lot of people have been waiting for “I Wish It Could Be Christmas Every Day” The song ends and that’s it for this year, a most enjoyable evening thanks to some wonderful musicians.

Ed’s note: aside from the Christmas song – I left to go and…use the facilities….this was a good night. Cheers to Damian for writing the review, I can’t do festive.