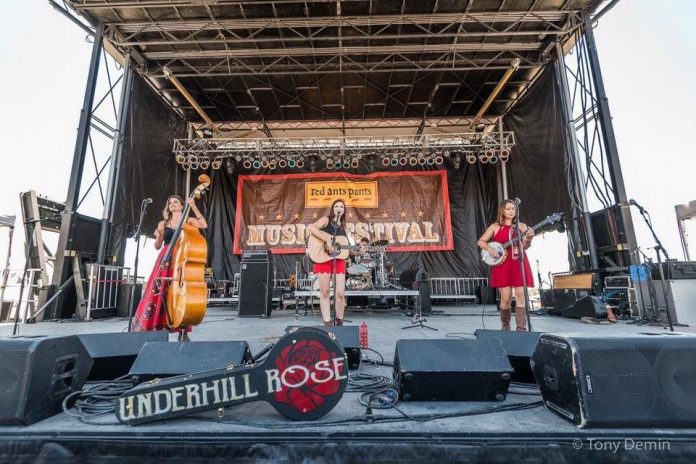 Bluesgrass trio back in the UK

With Eleanor Underhill, playing her distinctive claw-hammer style on a Deering banjo along with harmonica, Molly Rose on guitar, and Salley Williamson plucking the upright bass, the trio has carved out a place in the Americana scene with songs that run the gamut from heart wrenching to sassy and playful to thought-provoking. Eleanor’s salty blues-inspired voice and Molly’s soaring range lead the group in tandem with Salley’s country twang to create three-part harmony music that is real and inspired, rooted in everything life has thrown at Asheville, North Carolina’s pre-eminent female trinity.

Molly Rose and Eleanor Underhill’s musical partnership is the result of a chance meeting at a makeshift performance of ‘Angel from Montgomery’ between classes at Warren Wilson College. Molly Rose’s beautiful voice resonated with Eleanor, and the two eventually started performing live together. Their affinity for the music they make has kept them together for more than 12 years. Underhill Rose formed in 2009, and the addition of Salley Williamson two years later created the foundation for an internationally-recognized female trio known for blending aspects of Americana, rhythm and blues, country and bluegrass into an authentic sound that is all their own – “Heartfelt Country Soul.”

2016 has already become a high-spirited year for the boot-wearing trio, with performances atWoodsongs Old Time Radio Hour and Folk Alliance International, the band’s first-ever international tour to the UK and Ireland, and sold-out shows at clubs and performance centres along the way. On the heels of outstanding UK reviews for their latest album The Great Tomorrow, released to coincide with their first visit earlier this year, Underhill Rose return for a second UK/Ireland tour in November.

“After our first trip to the UK, I couldn’t be more excited to return” says Eleanor. “We met the most incredible people, saw beautiful places, and played on stages we can’t wait to return to play.”

To coincide with the November tour, the group will release its first holiday-themed single, ‘One Time a Year’, again produced by Cruz Contreras (The Black Lillies). Eleanor wrote the song about her personal holiday experiences. “I am excited to share this song” said Underhill. “The overarching idea is that the holidays are a time to be together, no matter who you are or where you live. The song is about gratitude for having that special time each year, and this tour will definitely be a special time for us.” A portion of the proceeds from the sale of the song go to Women for Women International, a cause that is dear to the band. Bassist Salley Williamson says, “We want to be of support to other women and give back in any way we can, and Women for Women International does that for our global community.”