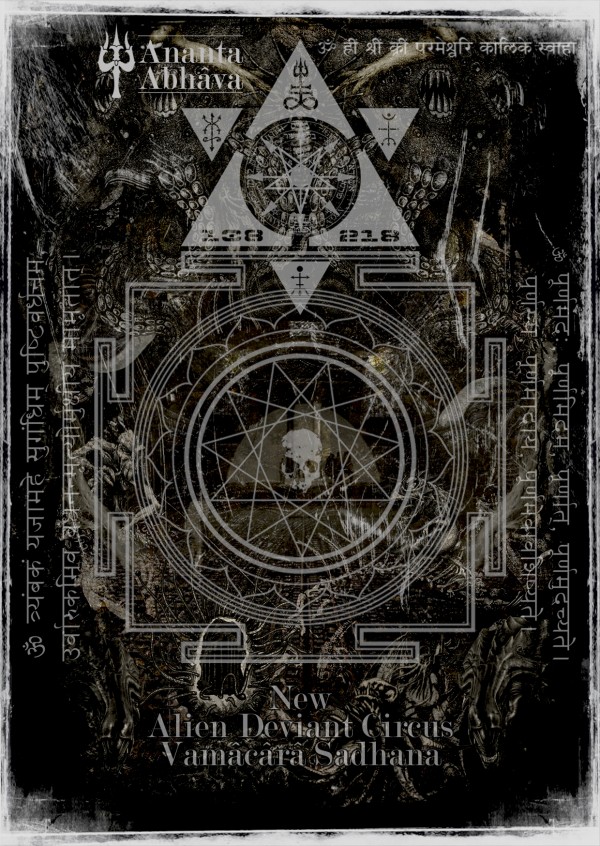 When this French Death Metal band speaks, we nod politely.

“My necklace and ornaments are of human bones; I dwell among the ashes of the dead and eat my food in human skulls. I look with eyes brightened with the antimony of Yoga, and believe that the parts of this world are reciprocally different, but that the whole is not different from God.”

You know things are going wrong when a band starts quoting ancient Hindu philosophy at you.  But nonetheless, that’s what Alien Deviant Circus do to start. The above passage is from “Maha Bhairava.” So is this.

!After fasting we drink liquor out of the skulls of Brahmans; our sacred fires are fed with the brains and lungs of men mixed up with their flesh, and human beings covered with the fresh blood gushing from the dreadful wound in their throats, are the offerings by which we appease the terrible god.”

The band tell us their new album is based upon: “The dissolution into chaos and the emancipation of personality from every kind of dogma or ethical concept. It promotes the total art of destruction, liberated from every influence or static ethic.” That’s cleared that up then.  It’s not just that though, they say, its also: “The metaphysical and philosophical thought is the dark thread of his global concept which takes root from a strong personal will and a reflection upon non conditioned expression.”

Asking them for their philosophy is no less problematic: “The World links up around our own act of de-conditioning and pour possibility towards the absolute in which society defines all political or religious values. Moralism is an obstruction to our awakening,” they tell us. “Art, philosophy and Waves are the way ov this awakening towards the black irradiant light. We shall awake in order to match our vibration to his source and to arrange the manifest according to our will… Let’s draw our strengh from decay, let us swamp with this source ov creativity, expression and death,” ok then.

With that, we ask them to sum  it all up.” Order shall never rise from disorder again. Dethroned mankind shall end his cycle in pain and dishonor.Ashes to ashes, dust to dust.Vae victis, and they’ll be numerous. Oderint dum metuant!!!”

The album “Ananta Abhâva” is just out.