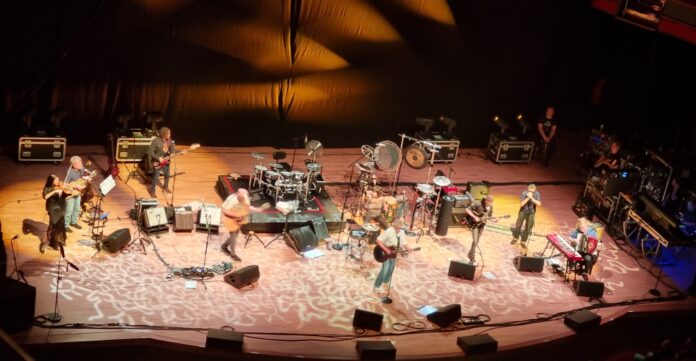 Roger Daltrey says, just before he plays “Without Your Love” tonight – where usually the encore would be – “people always say to me ‘you’re this or that, you’re wonderful’ the truth is, I am no different to you.”

I happen to believe that to be true and that everyone is equal, which is why I can say with some degree of certainty that the key to all of this comes just a little earlier.

Daltrey sings “After The Fire”. An early 80s tune that Pete Townshend wrote for him. It’s chorus goes: “the fire still burns”. And it surely must. Why else would a 78 year old legend (true in this case) be on stage to play? Other than he desperately wants to.

There is a warm, relaxed, chatty vibe to the show. He plays a Pete Townshend solo tune to begin with, “Let Love Open The Door” is acoustic and gentle here and would, Daltrey notes “have been better as a Who song.”

Yet, while the spectre of The Who hangs over this gig, after all why wouldn’t it? It feels much more like a celebration of music, of life even.

Daltrey dedicates “Freedom Ride” to “the delivery drivers, as this country is a nightmare to travel round” and the song itself is perhaps an indicator of something different being afoot. A Taj Mahal cover, it is turned into something blue collar and Springsteen-ish here, but this is very much a gig where interpretations are the order of the day. “Squeeze Box” for example is transformed into a real Jazz, Cajun infused thing and credit for that must go to the fantastic band that has been assembled for these 12 shows. Katy Jacoby’s violin is stunning (as it was for The Who in the past) but throughout the hour and 45 minutes each gets a turn in the spotlight.

It’s a well-paced set. A loose, almost barroom rock n roll of “Another Tricky Day” and what Daltrey refers to as “Shepherds Bush Blues” of “Who Are You” show both of those in a different light, and that trademark roar is in place for “Giving It All Away” – the Leo Sayer penned track from his first solo record – and when he does “The Kids Are Alright” he does so with the thought that “I haven’t watched ‘Quadrophenia’ since 1979”.

This had originally been billed as a Q and A too “because I opened my big mouth” in the event he answers a few that have been written down, which is just fine as tonight was all about music. “Tattoo” a lesser spotted Who song is excellent, as is Simon Townshend’s solo “The Way It Is” – played to give the main man a break he says.

There are a pair of fabulous tracks from the album he did with Wilko Johnson. “Some Kind Of Hero” particularly impressive, as Simon Weston’s harmonica turns it into something close to Sun Studios in the late 50s.

“Baba O’Reilly” turns into something uplifting, and would have, in usual circumstances, ended the set, but this doesn’t feel like a night for encores, and after “…..Love”, there’s a jam on “Young Man’s Blues” which sees Daltrey twirling his microphone around like the days of yore.

Before they played it, he’d said something prescient. Tonight was, he’d reasoned, about “a group of mates” playing songs to reclaim our lives after Covid. It certainly felt like that. There was such a relaxed, fun feel to this that it didn’t so much feel like a bloke who had been one of the most recognisable rock stars on the planet for getting on for 60 years playing a gig in one of the most opulent venues in the UK, instead it felt like a band in the pub playing songs because they could and people wanted to listen.

That, you imagine, is exactly what this was always supposed to be.