Rocket Dolls Get It Right 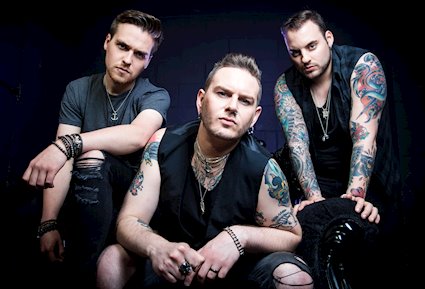 January 25, 2018
Reading time: 2 min.
Facebook
Twitter
Pinterest
WhatsApp
Linkedin
Email
Print
Telegram
Copy URL
By Andy Thorley
Ones to watch! The Rocket Dolls have premiered their energised music video for new single ‘None Of This Is Right’.
The song is taken from The Rocket Doll’s forthcoming sophomore album ‘DeadHead’, which is released 6th April.
.
“HERE WE GO….The first song from the new album, and now the first music video is here… there’s no doubt about it, we wanted to come out swinging with ‘None Of This Is Right’, says vocalist/guitarist Nikki Smash. “We shot the music video in London on a giant arena stage as we really wanted to capture the energy of our live show. Luckily for us Orange Amps were kind enough to help out with the back line which really aided in capturing the essence of the band and this song. Working with Dave Neale from Brighton based Wildstag Studios was a real joy, he did a killer job for ‘None Of This Is Right’; it’s a great representation of The Rocket Dolls right here, right now.”
Recorded at London’s award winning British Grove Studios (David Gilmour, Razorlight, Mark Knopfler) the forthcoming album ‘DeadHead’ was produced and mixed by Mark Roberts (Black Peaks, Rob Chapman, Toska, Dorje). Relentless in their approach, The Rocket Dolls have taken the rock mould, smashed it, and then meticulously pieced it back together again to deliver a fresh contemporary collection of music that combines the best bits of heavy rock, grunge, punk, and pop smart sensibilities. It’s clear the band have spent time wisely crafting their second album, as it’s a monster.
‘DeadHead’ is released 6th April 2018.
Pre-order the album on iTunes: https://itunes.apple.com/gb/album/deadhead/1332273219

Stream ‘None Of This Is Right’ on Spotify: https://open.spotify.com/track/6WF692us4rdO9jTSH5PxE1?si=94FOJrtLSpC2–WvbdWqKg

Previous article
Get Twitch Quick
Next article
Amorphis In The Studio