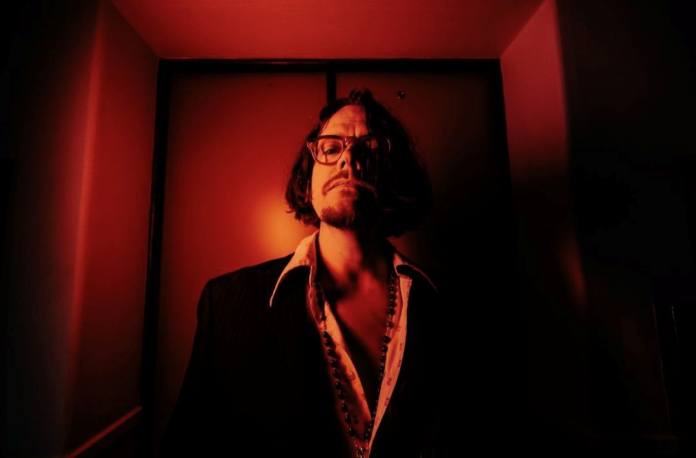 RIVERS JOHANSSON is proud to announce the release of his forthcoming new single DEVIL’S BACKBONE on 3 November via Man Demolish Records. A song, or in the words of Rivers himself, a sermon about a person fallen from grace. A morality tale of lower nature vs the pursuit of the divine.

Talking about the song, and others that developed at the same time, Rivers explains: “Devil’s Backbone came to fruition at a low point in life, pre-pandemic when I struggled to find my place in this world. I was in a full tilt existential crisis and creating this collection of songs was the only passage out of the chaos and into the light”.

“Art saves lives,” he continues, “it connects you to something higher than yourself and it certainly saved me from a bizarre and corrosive self-inflicted nihilism.”

Devil’s Backbone, along with other tracks for Rivers Johansson’s forthcoming album Long Way Down (One Last Thing), were recorded at Uber Studios in Hull by producer Rob Burgess – a man with a long history of working with a who’s who of Hull music – and was mastered by Howie Weinberg whose list of Grammy Awards successes include Smashing Pumpkins, Beastie Boys, Madonna, PJ Harvey, U2, Garbage and, of course, Nirvana’s Nevermind.

Rivers has been writing, recording and performing his unique brand of the darkest blues since 2014. Hailing from the small town of Beverley in East Yorkshire, he is a one-man band, a mix of dirty and hard hitting slide blues that thrusts along like a locomotive to the sound of his kick drum, creating a gnarly, raw blues-rock sound. For both the Devil’s Backbone single and the forthcoming album he opted for a full band sound and recorded drums, bass, keys, saxophone and vocal harmonies to add extra layers to his music.

“There’s even opera on this record,” he muses. “That’ll piss off the blues purists.”

“I wanted to push myself as a musician and in turn make a more musical album. To achieve this I added more varied instruments, vocals and arrangements. I wanted to keep myself on my toes and keep myself guessing. There is an excitement in an abrupt left turn in music creation. I enjoy the fight and I always question my choices and motives. I do this ultimately to serve the song, and I live for walking that knife-edge when creating music. That’s where the magic is, within that struggle.”

Rivers’ main musical inspiration is unquestionably Nick Cave and The Bad Seeds. “He is everything to me,” he states. “I wouldn’t exist as a creative without him. My other influences range from Muddy Waters to Nirvana; I was a 90s kid and Kurt Cobain captured my heart and my mind. Those influences, I am proud to say, are all over this record.”

The release of DEVIL’S BACKBONE will be marked by a launch gig at Dive on Princes Avenue in Hull on Thursday 3 November with support from Big River Boys and Backroom Blues Band. Doors at 7.30pm. Ticket price: well, it’s free.