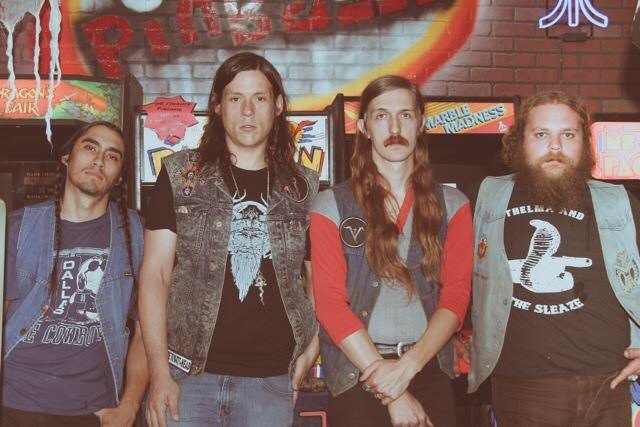 Austin, Texas psychers sign worldwide deal with Ripple Music – and get their groove on with new track too.

Heavy psychedelic act SWEAT LODGE has signed with Ripple Music and their new album, Talismana, will be out in early 2015. Keep an eye out for more details in the coming weeks, but for now, you can get a taste of the new album by clearing yourself an area to rock out and streaming the infectiously groovy track “Slow Burn” on Bandcamp.

Sweat Lodge are aptly named, as the sound produced by this Austin TX, vibe tribe is best experienced in a dark, smoke filled room. Eschewing modern tendencies in heavy music to rely on brute force, the group combines epic, technical songwriting with enough neolithic heaviness to keep the cavemen happy. Beginning as a bass/drums/vox trio in summer 2010, the band developed a groove-laden sound that relied on Caleb Dawson’s heavy yet nuanced backbeat and the saturated tone of Austin “The Shock” Shockley’s gnarled bass-fuzz, laying the foundation for singer Cody Lee’s soaring vocals. As heard on their cardinal self-titled 7” recorded the following year with Orville Neeley (OBN III’s, Bad Sports etc.) the tight, dynamic rhythm section and commanding vocals deliver the songs expertly, but their ambition to expand sonically would require the addition of 6-string guitar. Enter guitarist Javier Gardea and permanent addition to the groups lineup,guitarist Dustin Anderson,who play off of one another to create a web of intricate melodic sections matched with one-ton riffs and passages of hypnotic psychedelia. In the two years since,the group’s sound has become bigger and better, culminating in the recording of the group’s first LP.

The debut full-length Talismana tackles the ponderous concept of man finding his place in the universe and the many physical and spiritual hurdles one faces in the process. In using the concept of the talisman as protection against evil and vice as well as a catalyst for change in the self and society as a whole, frontman Lee uses his songs as a platform to address the metaphysical and psychological plight of modern man through the lense of ancient wisdom and magical practice. Much like the ceremonial lodge which inspired their name, the music of Sweat Lodge offers enlightenment and purification to those who can stand the heat.