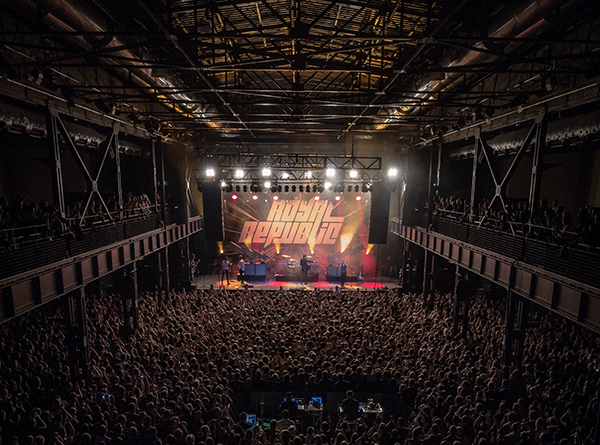 Royal Republic will return to British shores in Spring 2017!

Fresh from a sold out tour of Germany, these irrepressible party starters from Sweden have lined up headline shows in Glasgow, Manchester & London, with tickets going on sale starting at 10am on Friday, December 2nd and available from www.livenation.co.uk

“The Sold-Out UK shows in October were amazing, and has left us with the opportunity to come back in spring! We will seize this opportunity and could not be more stoked!”

As well as opening the newly-crowned ‘Lemmy Stage’ at this year’s Download Festival, Royal Republic recently completed a sold out headline run in the UK as part of their ‘Weekend Man’ tour, with three venues being upgraded due to huge demand; this tour was in support of the Republic-ans latest studio album, ‘Weekend Man’, released in February 2016 via Spinefarm Records, the start of a new relationship with the label.

Crafted in Berlin’s Fuzz Factory Studios by producers Christian Neander & Michael Tibes, ‘Weekend Man’ (the album) sees the dapper Swedes delivering their customary rock thrills with even greater gusto – a bold statement of wild-eyed intent founded on big hooks, mountainous melodies and a signature sense of fun. Generally speaking, the aim is to put smiles on faces, but now an’ then a deeper, darker side peeps through, as displayed on the band’s video for ‘Any Given Sunday’ – an “epic tale of love, death & desperation” featuring legendary Swedish soap star Gunnar Mosen.

The clip for current UK single ‘Baby’ was selected for the Music Video Programme at the 24th Raindance Film Festival in London; you can view it here: