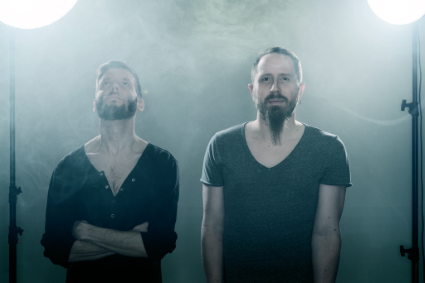 The Swedish duo A Swarm of the Sun will release their second album, “The Rifts”, on January 30, 2015. It is a bleak and beautiful journey through the innermost landscapes of the heart and soul. A brooding album about losing hope, dreams falling apart, isolation and final moments of clarity and redemption. Unquestionably, this is the band’s darkest and most emotional album to date.

“The Rifts” reflects on various implications of a very specific, profound and personal struggle. It is the manifestation of feelings, thoughts, hopes and fears that was too abstract and overwhelming to be expressed in any other way. What initially was a handful of piano sketches, nine song titles, a few lines of lyrics and a notebook full of script-like visual references slowly but carefully evolved into something much more dense and layered. Karl Daniel Lidén was brought in to add the drums, which he later also recorded. The sessions culminated with the recording of the pipe organ. The result is massive, cinematic and pummeling; a foreboding and ritualistic exorcism of the emotional truths it aims to convey.

A Swarm of the Sun is Erik Nilsson and Jakob Berglund. “The Rifts” is written and produced by the band, and recorded by Erik Nilsson at Garaget Studio and The Church of Brännkyrka. Drums are performed and recorded by Karl Daniel Lidén (Vaka, The Old Wind) at Studio Gröndahl. The album is mixed and mastered by the acclaimed Magnus Lindberg (Cult of Luna, Refused, Khoma, Pg.lost). All artwork, concepts and cover design, as well as a number of videos that enhance and complete the experience of the album, are directed and produced by Jakob. “The Rifts” is released through Erik’s own label Version Studio Records. It will be released as a luxury double-vinyl LP, an eight-panel thick cardboard stock digifile CD and through a number of digital platforms.

A Swarm of the Sun debuted in 2007 with the EP “The King of Everything”, and released the critically acclaimed full-length album “Zenith” in 2010. Erik runs the record label Version Studio Records, and is also a member of Aoria. Jakob produces and directs visual art and moving images, most recently music videos for label mates The Isolation Process and black-metal act Astrophobos.