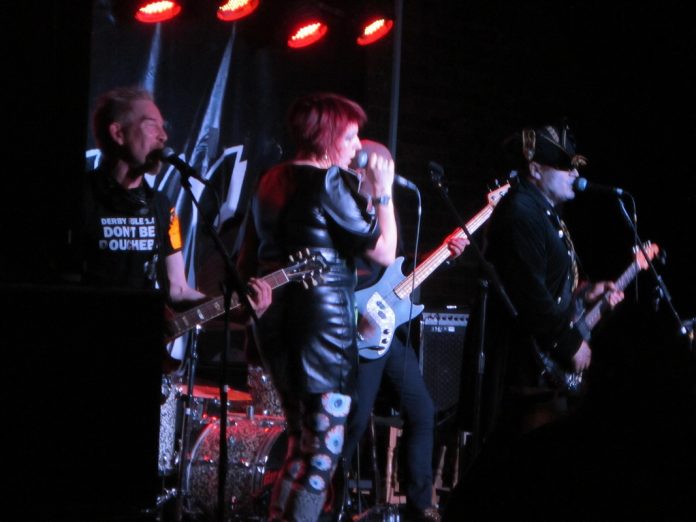 Damian takes forty years to see a band (yes, he is that old)

The theme from Stingray blasts through the speakers as the band arrive on stage and it’s straight into “I Can’t Stand My Baby” followed quickly by “Bad Guy Reaction” and “Flying Saucer Attack” before the band come up for breath.

I have been wanting to see this band since they formed forty years ago and can say that I’m old enough to remember them coming out. The Rezillos were never the usual punk band but more a new wave, almost sixties beat group, more akin to bands like The Cramps and the B52`s.

The group, these days comprise of Fay Fife and Eugene Reynolds sharing vocal duties, Jim Brady on guitar, Chris Agnew on bass and last but not least Angel Paterson on drums.

The band released a new Long Player last year after nigh on forty years called Zero and they air“(Take me to the) Groovy room” from it and the title track “Zero “ plus “Life’s a Bitch” and “Sorry about Tomorrow” later in the set.

The group have always had a fascination with Science fiction and B Movies so we get amusing three minute songs such as “Getting me down”, “No”, “It Gets Me” and “Mystery Action”

They are a great entertaining fun band and Jim gets into some discussion with the audience about having recently changed his socks and his pants. Cheers Jim thanks for sharing.

The final two songs of the set are a cover of Ike and Tina Turner’s “River Deep, Mountain High” and “Destination Venus” which highlights that although these guys are a fun band, they can certainly bash out a tune. Fay gets to prove that she still has a cracking voice that can really belt out a classic with the best of them.

Exit stage right before they return for a two song encore which includes Dave Clark Five’s “Glad All Over” after much discussion amongst the members of the band.

I really enjoyed this show and more so looking back on the night. It may have taken me forty years to get to see them but it was worth the wait.