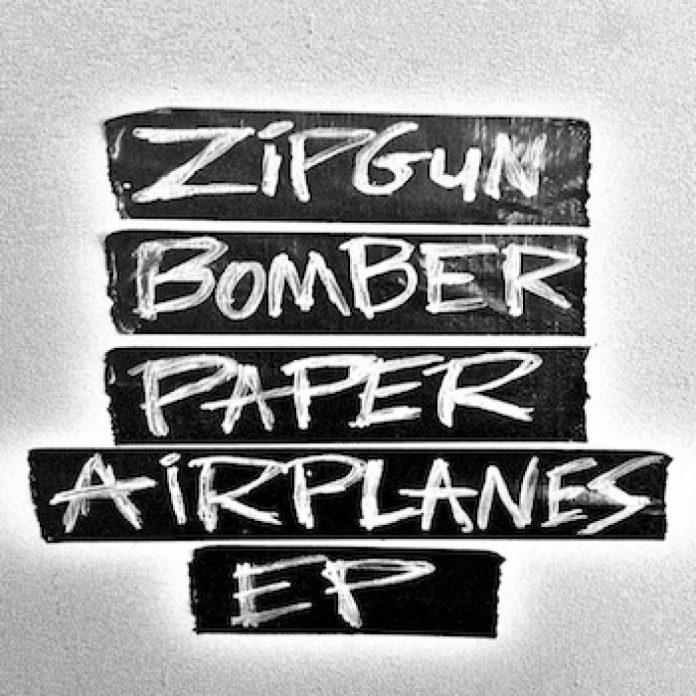 I am – sadly – even at my age, easily distracted. You know that episode of The Simpsons where Homer sees a dog with a fluffy tail and charges after it? That’s me too.

So, I blame Zip Gun Bomber for the fact this record nearly never got reviewed at all. Not knowing much (ok, I am lying, anything) about them, I put their name into Google.

Thing was, what came up on Google was something about some unsolved murders from 35 years back, and by the time I’d finished reading about this terror that befell New York, I’d remembered that I hadn’t done anything that I was meant to.

So anyway back on track: This Zip Gun Bomber is a punk band formed in 2011 by Nate Doyle. He was in The Guts, along with MV fave Geoff Palmer, and this is a re-release of the “Paper Airplanes” EP that came out a few years ago.

Here, though, is what you need to know. It’s pop punk just like it used to taste.

The Green Day record that came out this year was a brilliant return to form from them too, and “….”Airplanes” deserves to be viewed in that category too. Right from the opening riff of the opening track “Chase That Feeling” it is what it is, and that’s basically something off the Lookout! Records roster with a touch of extra harmony.

“Reflections” repeats the dose, essentially. Maybe adding a touch of Honeycrack-esque stuff to the mix, and you’d best believe that this is catchy stuff. “Wishing For Rain” goes fizzing along like a Sherbet Dip, and nearly as sweet.

A superb EP, its worth pointing out that it is released on Rum Bar Records, and consequently it also has some heartland grit about it – their records always do. “Tuesday Afternoon” for all the pop stylings, understands like all the best do that It needs some grit too.

This one even ends with a ballad. Acoustic, the title track is a moment of tenderness. And I hope you had the time of your life. It also has a key line: “through it all,” sings Doyle. “I believe in my art.” Well he might too. This is his vindication.

Aside from the Green Day single, my abiding memory of the pop punk era is this: I was out with the people I used to work with (there was a girl involved, else I wouldn’t have even pretended to be sociable….) and Blink 182’s “What’s My Age Again?” was playing where we were. The best looking woman in the bank chose that moment to ask me if I wanted to go to another club with her after. My reply: “urmmmm no thanks, I’d best not, I am going to watch football with my brother tomorrow and I need to be up early” is one of life’s biggest regrets. Especially as I still see her most days when I am distracted and looking out of my window as she walks past my house….

Ahhh nostalgia. That’s what this is for, right? Anyway, how did the other Zip Gun Bomber get away with it? Anyone know?