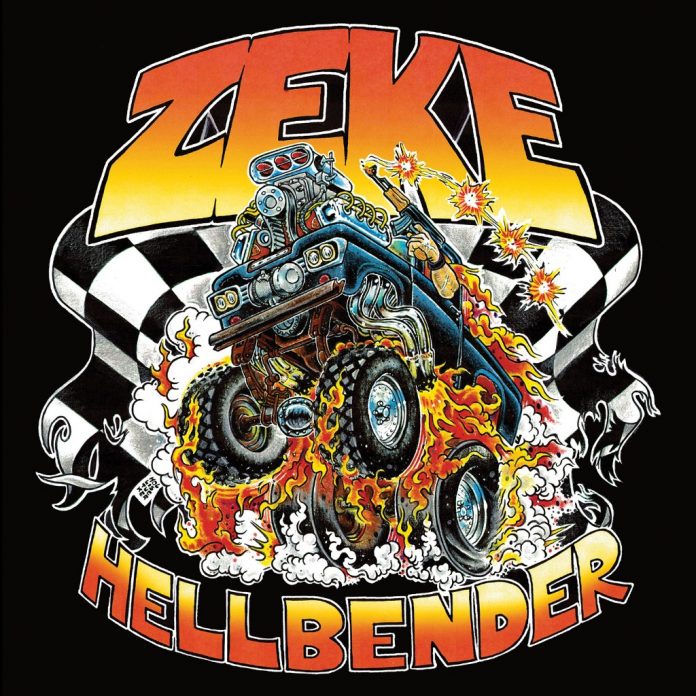 “And now I’m back, guess I never really went away”. So sang The Wildhearts on “Do The Channel Bop” back in the dim and distant and those words were winging their way around my head as I listened to “Hellbender”.

Their first album for 14 years is one thing, but here’s the crucial bit, there’s 15 “songs” here (and I use the word in the absolute loosest sense) and the whole thing is about 25 minutes long. I know this because that’s how long it takes me to get work in the morning and the album lasted the right length.

That’s not to say that “Hellbender” is perfect commuting music – unless you are driving into the gates of hell with your Harley on fire. And you won’t find it on one of those horrible classic rock compilation albums that you’re meant to buy your dad around Father’s Day – unless your dad happened to be the head of the Hell’s Angels, you probably should steer clear.

So, for the uninitiated what are Zeke? Well, Zeke, right from the time MV used to buy their first split 10 inches in whatever underground record club we were in at the time, are loud, obnoxious, grease stained, smelly, dirty and filthy. They are probably the fastest, loudest, nastiest rock n roll band on the planet. Or put another way, you know that bit in a Motorhead concert where Lemmy used to come out and say “we’re Motorhead and we play rock n roll”? That’s Zeke, that is. All the time.

And yet, the key words there are “rock n roll” because they play proper fully-formed tracks, just really, really fast. All of which means that “All The Way” and “Two Lane Blacktop” might bludgeon but you can still join in.

“On The Road” begins with the growled thought that “can’t wait to not do tomorrow, what I won’t do today” and with that its off to eat barbecue and drink beer (dunno why I just imagine these four boys love a good pit of ribs) and the die is cast.

Normal reviews are pointless when it comes to Zeke, partly because they don’t play by the rules and neither should we, but also a Zeke record is about visceral feeling. I can’t analyse why 52 seconds of punk fury with a bloke shouting “County Jail” is ace I just know, instinctively, it is.

“Goin’ Down” is another quickie  and that conjured up all kinds of images, “White Wolf” is 79 seconds that rips thrash a new arsehole, “Cougar Rock” is like the Hellacopters first album was for pop fans and this is the x rated version, while “Devil’s Night” is so hyped up, it would take on Satan himself and probably win.

It ends – appropriately – with “Big Rig” and you can imagine Zeke driving one through the night doing whatever they are doing in the back and once its finished you feel dazed and confused. Like one of those masochists who likes pain you want to put it on again too. The sound of being bludgeoned with a bat. Repeatedly. And fast. Never sounded so good.

All of which means it’s business as usual in the world of Zeke. If they moved in next door you’d lock up your pets and put the house up for sale.