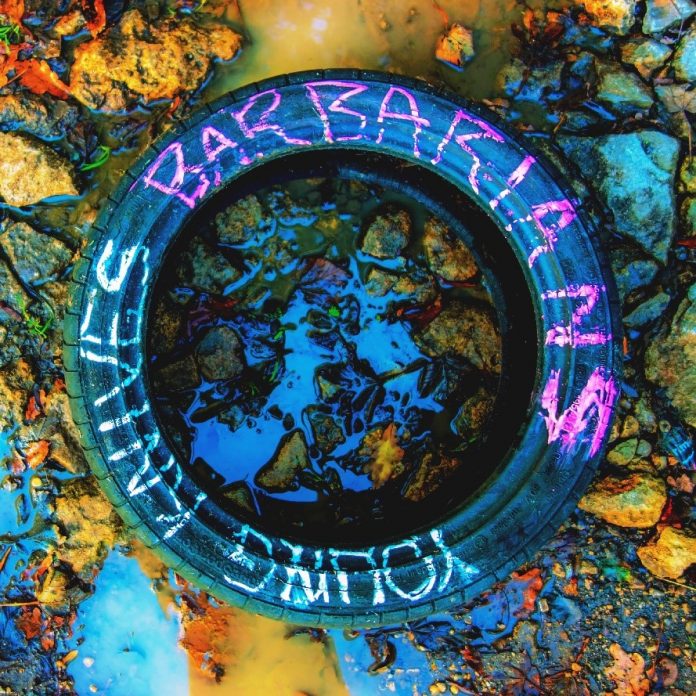 Young Knives are an English indie rock band from Ashby-de-la-Zouch, Leicestershire. The name is based on a misunderstanding of “young knaves”, which was found by the band when rummaging through a book. The band comprise of Henry Dartnall (vocals, guitar), Thomas Dartnall (vocals, bass guitar), also known as his stage name “The House of Lords” and Oliver Askew (drums, backing vocals). The band always need a good reason to make an album and the key inspiration this time came through reading the philosopher John Gray’s book `Straw Dogs.

The album opens with `Swarm` a strange quite hypnotic offering with repetitive guitar riffs and distant vocals that are laconically shared atop. Although the chorus of “Freedom with a big F, Freedom with a little left” is almost abrasively shouted. The band have stated that the track is “probably about the love hate relationship we often have with being part of a crowd, or the collective human experience and the idea that we can never be a totally free individual, something like that”. There`s an underlying mesmerising beat to ` Society for Cutting Up Men` which was inspired by Valerie Solonas, the radical feminist who shot Andy Warhol and whose `SCUM manifesto` argued that men had ruined the world, and that it is up to women to fix it. To achieve this goal, it suggests the formation of SCUM, an organization dedicated to overthrowing society and eliminating the male sex. The song is almost a call to arms.

`Jenny Haniver` musically is a more rock out sort of number but still retaining that edge of curiousness. I didn`t know what a Jenny Haniver was but it turns out that it`s the carcass of a ray or a skate that has been modified by hand then dried, resulting in a mummified specimen intended to resemble a fanciful fictional creature, such as a demon or dragon. A song Inspired by a visit to The Imperial War Museum where the wreckage of a car used in a car bombing in Baghdad is displayed comes with `Red Cherries` an aggressive wall of sound at times with occasional brass or horn samples in the background, quite unnerving.

I read somewhere that Henry Dartnall said that `I Am Awake` is about realising that ninety-nine per cent of life is suffering and that things only have meaning because they will eventually end. A bit of a pessimistic outlook but the song itself while not uplifting has some interesting electronic swathes and flowing vocal inflections. There`s a sort of curve ball with `Holy Name ’68` a recording made by the Dartnall boy`s mother in Papua New Guinea when she was a VSO, the song would seem to be `There`s no place like home.

Title track `Barbarians` was inspired by the extinction of The Aboriginal Tasmanian people and the band wanted to make something that mixed experimental sounds and drones with pop / danceable music, aggressive hip hop and rock with a message. It begins with samples of fights before the music kicks in and it does enjoy a sort of antagonistic, hostile feel with the vocals almost spat out at times but retains an electronic dance like vibe. The guys maintain that `Sheep Tick` is a more introspective offering musically with lyrics that speak about a more inherently negative outlook on the world. An interesting track that was quite compelling and unsettling in the same sort of measure.
`Only A God` builds slowly with a pulsating beat and you almost expect that crash or holler to come, which it threatens but doesn`t deliver yet it retains that sense of underlying danger throughout. The album closes with `What I Saw` which has some wonderful drumming throughout and some curious brass and horn sections. At times there are some harmonies of “OA OI” that give it an almost Afrobeat texture and ending with a sort of brass band feel.

There was so much to enjoy with Young Knives’ latest release. I came to the band, not knowing their previous work and expecting some indie, possibly shoegaze offering but this was soon redressed in the opening salvo. This was certainly experimental rock and the nearest I could compare them to is Can.

I really enjoy a band that ask more questions than they answer and relate to topics that you have to spend a little time exploring. “Barbarians” is strangely compelling like a live electrical wire that you shouldn`t hold and I was certainly drawn to this as a moth to a flame.