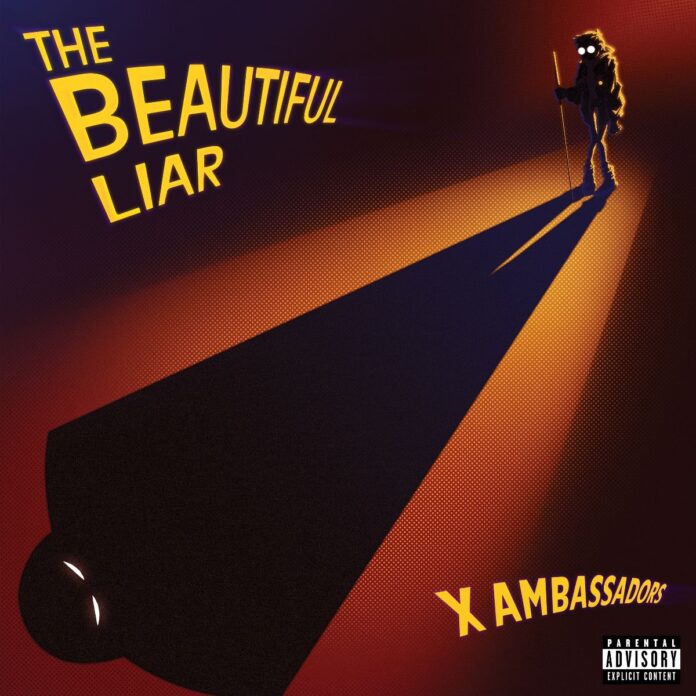 Never mind anything else, when I think of radio dramas I can’t help thinking of that episode of Frasier where he tries to recreate a favourite of his growing up. There’s a kind of synergy here, in truth, with X-Ambassadors, not least of which is that I would have watched it with my brother. And there’s no denying that having a disability brings you closer together with a sibling. I know. I have had one since birth and my younger brother, to this day, instinctively knows when I need his help.

I can’t speak for Sam Nelson Harris and Casey Harris but I’ve watched them live, I’ve followed their work, and I’d go so far as to say the fact that Casey is blind has shaped who they are, and what their music has become. Certainly, its made “The Beautiful Liar” what it is. A concept album made about the imagination of a young blind girl and her “superpowers”. It’s a homage to the radio plays and books on tape (Audible downloads for the GenX’ers) that the Harris’ used to explore together.

X-Ambassadors have, pretty much got the title as the most forward thinking pop group on Planet Rock nailed down. No one does it quite like them. Listen to “Beautiful Liar” (the track) and its clear. I’ don’t know if pop prog is a thing (I might just have invented it) but this comes from a twisted mind and – not even hyperbole this – its shot through with a kind of genius.

There’s some kind of darkness in the rhythms of “My Own Monster”. K-Flay is one of the writers on the album and she might be the only one who gets close to this kind of bleak disco, while the genuinely unsettling “Adrenaline” (“I think I am going off my medicine, I think I need to feel something again”) is underlined by the happiness of the melody.

“Bullshit” is anything but. A kind of lugubrious Beck-style guitar line gives way to the pulsing drums that Adam Levin specialises in, and the lyrics are as raw as ever. Chapter Two’s “Conversations With My Friends” is part polka, part nightmare, and its difficult not to get sucked in as Harris speaks “I am fucking lonely” as if he’s taking you into his confession booth.

“Palo Santo” adds a Latin flavour, but lets be fair, “Livin’ La Vida Loca” this is not, and just when you feel that this story can’t get any more twisted then “Love Is Death” comes along and the fact that no one does this in quite the way XA do it, is referenced by the glorious acoustic driven “Someone Who Knows You”. And its difficult at this point to decipher where the “story” ends and real life begins.

“Okay” adds a bit of a silver lining, but this is not that type of album, its not designed to be. Rather “Reincarnated” is proud of its outsider status, this is one of its verses:

Nothin like a good ass-whuppin to bring out the beast

Like when you said my music sucks, “nobody cares about your self-confessional bullshit”

I’ll make an album for you baby

I’ll play it louder for you baby

Cause what goes around comes back around

You can put me six feet underground

And I’ll come back swinging”

Which is why my usual caveat with concept records doesn’t apply either. The usual philistine thing I say of “yeah, but are the songs any good?”. Here, on “The Beautiful Liar” the story is the songs, the songs are the story.

Earlier in the review I called X-Ambassadors the best pop band on Planet Rock. That wasn’t a mistake. Frankly, there’s no other band who does this. They don’t fit in anywhere. They know it. And if they cared, they wouldn’t make music this brave, beguiling and original.