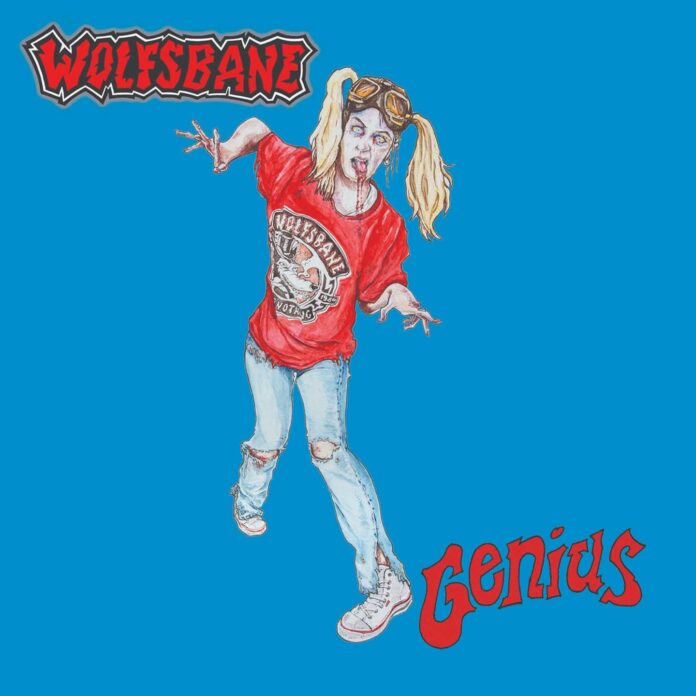 To begin the second half of “Genius” (side two if you will) there’s a track called “Things Are Getting Better”. It encourages us to celebrate the good things. The next one “Good Time” rockets along doing the same thing (with added glam rock handclaps). It rages about the state of the world, “there’s no danger in the echo chamber” spits Blaze Bayley, “they’ve taken things too far.”

Usually this would be enough for MV to start a rant about the evils of social media (#resistzuckerberg as ever) except I am as big a hypocrite as anyone. Where did I find out that Wolfsbane had a record out? Ritch Battersby’s Twitter feed, that’s where.

The Grand Theft Audio man tweeted about the album the other day, reckoning he’d been listening on repeat since it came out. He’s not wrong, isn’t the boy. The damn thing rules.

Now, come with me on a journey back in time. To Tressines Night Club in Birmingham, in summer 1991. I doubt that Wolfsbane even remember they played the launch of the youth rock club. They did. And we were there. Clutching Skid Row 12 inch singles (“Monkey Business” had just come out) me and MV’s Donnie watched what was technically our first gig. One of them couldn’t make it (gun to my head I think it was Jase Edwards, but I’d have to check my old autograph book) but they played and I still have the badge they gave out – and I am still a proud Howling Mad Shithead.

All of which goes to underline, I hope, how far I go back with this band. They were our boys. When Blaze Bayley went to Iron Maiden just after, we’d proudly look on and go “I’ve met him!” when he was on Top Of The Pops (even to this day, when Blaze says hello to me if I see him, I get starstruck).

“Genius” is the first Wolfsbane record for a decade, and within about 15 seconds of “Spit It Out”, the opening song, its clear that they are still without obvious peer. “Give it some bollocks” suggests Bayley, as he looks back on their past, and for two minutes four seconds this is the good time rock n roll that you/we are here for.

“Zombies” begins with some cheap science fiction, b-movie synth, the sort of stuff you might see while flicking over the tv about 1am and desperately trying to avoid Babestation, but my goodness me, how they can write a chorus, still.

“Impossible Love” gets cowbell bonus points, and is as sweet a love song as you can imagine. That its played by The Hells Angels rather than Poison is even more fun.

There’s still a thing about Wolfsbane where they just manage to sound like the perfect soundtrack to a small town Saturday night. “Rock The Boat” is the last gang in town, and even the brilliantly mellifluous chugger “Small Town Kisses” (a kind of West Midlands “Summer Of 69” set to a pop punk beat) has a wicked glint in its eye.

A lot of it reflects on youth (MV and the band aren’t too far apart in ages) so “Rock City Nights” resonates here too. I haven’t got “a body like its 1989” anymore either but the song is ace. They all are. There’s a Wildhearts vibe to the music on “Running Wild” and there’s a joy to the idea that “rock n roll is reborn” as Bayley almost exclaims.

The last one, a piano ballad “I Was Born In ’69” is brilliant (and I assume any similarities between that and “Born In 58” on Bruce Dickinson’s “Tears Of A Dragon” and “All The Young Dudes” are purely coincidental) but it proves just how important music is to these boys.

And “Genius” shows that there’s a chemistry here that transcends whatever else they’ve done with their careers. There’s a line in that song where Bayley sings: “we played each night like it was the last….to a misfit crowd who understands, sometimes its more than just a band.”

This kid born in 75, and who also lived in the Birmingham overspill gets it. Cos I was one. Still am. Sometimes, maybe, Twitter isn’t shit.