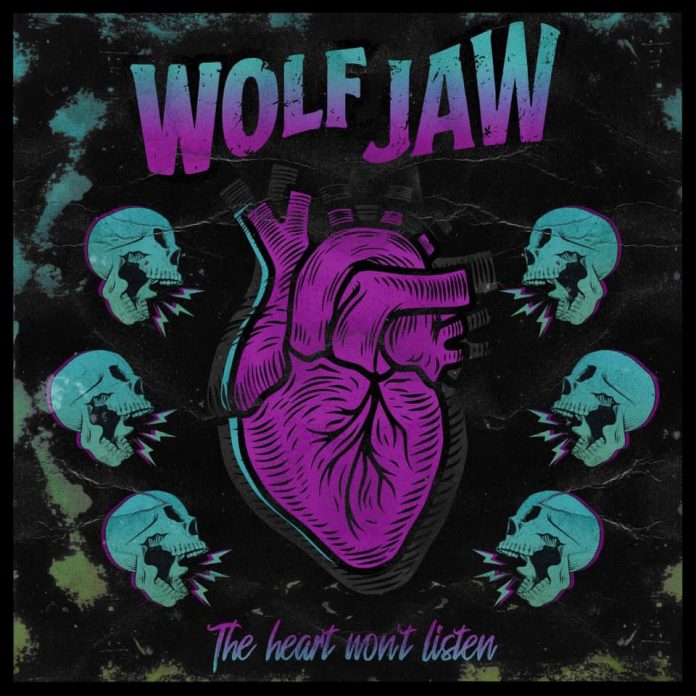 Back in the summer I saw Wolfjaw support Crobot.

Crobot rule, and if you had to pick a band to go on before it’d probably be them, because goodness knows, you wouldn’t want to go on after.

Three years before that – give or take a month as it happens – I’d seen a band called Bad Flowers do the same.

That’s important, because they are the same band. Except, they aren’t.

I’ll explain. Bad Flowers were building up a profile, Planet Rock Tours, a debut record that I proclaimed on these very pages, was “surely the sound of a band who are on their marks, ready to really go places.”

Then last winter they changed their name, announced this record, and we waited.

When I reviewed that Crobot gig, I said this: “there’s a detectable harder edge to the new stuff.” And sitting here, a few months later with “The Heart Won’t Listen” it really strikes you.

If you were a fan of Bad Flowers then there’s still much to enjoy, but this is actually a pretty different sonic attack.

Darker, “your black cloud above my head, your toxic rain that wants me dead” is a pretty bleak image and that is the opening song – the superb “Hear Me”, which rather demands your attention. Already firmly ensconced in the live set, it will become a favourite.

Singer/guitarist Tom Leighton seems to have unleashed some Nick Cave type sound to his voice and the lead pierces just a touch more than it did, and there is a suggestion that the band as a whole has become a little more strident. Certainly, there is a swagger about “I Ain’t Ready”. Coloured in more primal shades than before, Dale Tonks’ bass underpins it and Karl Selickis pummels the drums here.

Indeed, for all that this is hard rock, it is hard rock with a groove that swings like a wrecking ball, “Ticking Time Bomb” seethes with a barely disguised rage, “The Fighter” delivers its knockout blows fast, and precise. These are not jabs, either, but full-on haymakers.

“Piece Of Me” a single that emerged a while back deals with anxiety. It sounds personal, but it has an everyman quality. It also sounds like The Cult, and would be the best thing here, were it not for the mighty “Open Your Eyes”. A slow-burning, smouldering near epic, it forms the centrepiece of the record, almost, and when the solo hits, it is then you realise that whatever Bad Flowers were, Wolfjaw have built on and changed it.

Even the subjects are different on “….Listen”. If the last one couldn’t resist the “City Lights” then this one isn’t keen on organised religion. At least it isn’t on “Choke” anyway. “I Lose My Mind” on the other hand, doesn’t sound too much different to The Picturebooks (another band I saw them support.)

The reason for this new found, decisiveness? Well, if I may be so bold, it might be in “Shoulda, Woulda, Coulda”. “You’ll never take my dream away from me” roars Leighton, and he’s sounding the rallying cry. A warning, if you like.

“Beast” is probably the heaviest thing they’ve got, and it’s to their credit that they do it so well, while “Living The Dream” does a more hard rock thing – and as the closer to the record is arguably the closest to the debut. “We’re all living the dream” goes its hook, and to be honest, there is that kind of air about the album.

This is more than just a band who changed the name. This is about a band that has morphed into something fresh. Ironically for a group who’s last album was called “Starting Gun” it is “The Heart Won’t Listen” that sounds like a true beginning.

Previous article
BAND OF THE DAY: EDGE OF FOREVER
Next article
NUN LOUDER