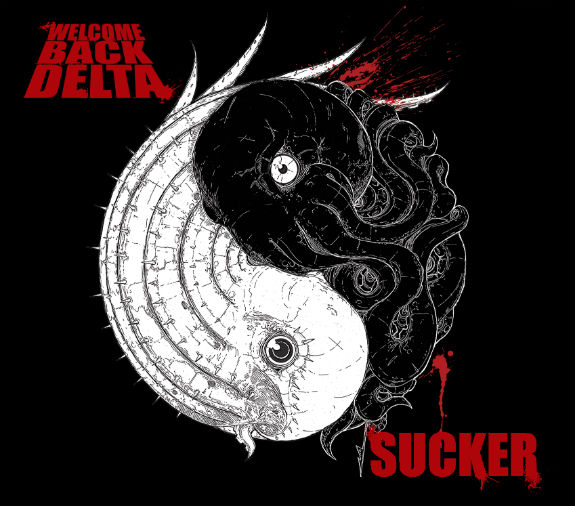 Welcome Back Delta have long been one of the best bands on the British underground scene. The West Country quartet have been – rather like fellow travellers on the toilet circuit One For Sorrow who’s album we reviewed yesterday – busy in a van, going wherever there’s a stage and some punters (and to be honest, at some of the gigs MV has seen them at the two things have not been mutually exclusive), and in so doing they’ve rather honed their craft.

So much so that “Sucker” album number two and follow up to 2014’s stellar “Sucker” is a better more diverse affair, one which will hopefully rid them of the lazy “stoner rock” epithet that so often they are tagged with.

Because, “Sucker” is just a great blues infused rock n roll album, the wonderful “Arms Dealer” for example could be on a Monster Truck album and not be out of place, while “The Magic Of Flight” is hypnotic and laid back in a Screaming Trees type of ballpark and marks a band that fancies some real growth.

WBD, understand, though, that rock music essentially is designed for fun and “Beast Mode” begins with echoes of “Welcome To The Jungle” and a drum roll, which can’t be bad however you want to look at it. The follow up tunes aren’t half bad either and if “Snake In The Grass” and more particularly “Thrones” – with its big old swinging groove – knows its way around a Clutch record or two, then since when has that been a bad thing?

Really, there’s no let up in quality, or downright grins, anywhere. “Dadgerous” sounds like its having so much fun it’d be rude to stop it, and “Jeremy’s Iron” steams on the back of a dirty transit packed full of Orange Goblin songs, with Joe Kelly getting good and gravelly on the vocals. “Here we go/ can you make the show?” he asks in the chorus, and lets just say, there’s cowbell, so why wouldn’t you?

“Black Tie” gets all primal blues on you, with its tales of life on the road, and the glorious “Preacher” is less a song than a force of nature. Its huge and it is southern rock done right. The final thing on here – “Don’t Hold It Against Me” almost dares you to hold it back and is surely destined to be the soundtrack to as many nights out as you can name as it winds its positively hedonistic way around.

As so often with these things, the mainstream is perhaps too busy looking across the Atlantic for the next big thing while ignoring the talent on our own doorstep. The unsigned scene has many great talents for sure – it just so happens that Welcome Back Delta are amongst the very best.

“Sucker” proves that beyond any reasonable doubt.