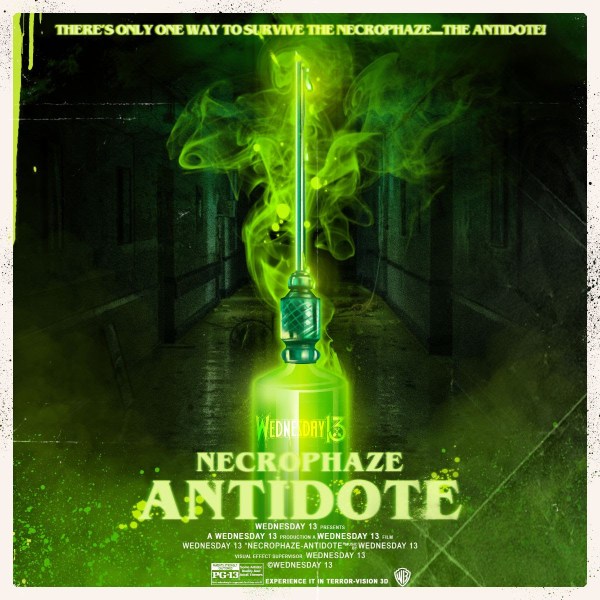 Back in the mid 2000s I used to trawl the internet looking for music. I was then – and am still – obsessed with Alice Cooper. I consider him to be the king (for full disclosure, I am actually wearing an Alice t-shirt typing this).

On one of those journey’s (I believe the cool kids now call them “rabbit holes” I was looking for “shock rock” (a bollocks term if ever there was one) and came across a chap called Wednesday 13. Back then, he was making demos that were recorded with the  same quality I’d tape the top 40 with in the previous century. His music was raw, kind of punk and frankly, if you weren’t offended then the boy wasn’t doing his job. There was a song knocking round then called “Your Mother Sucks Cocks In Hell”, which was fun, lets be honest.

Now, the boy has been through the Murderdolls, he’s a proper solo artist in his own right and 2019’s “Necrophaze” record was a masterpiece of the craft.

So, now he needs a single – and lets be fair here, no one buys them – so as far as I can tell, for no other reason than shits and giggles (even the record company hasn’t sent any info with it) he’s put it as the lead song on the four track slice of nastiness that you have before you.

Now called “Your Mother Still Sucks Cocks In Hell” it is basically what it would sound like if Motorhead jammed with Coop. That makes it just about the best thing ever (and yes, they know it sounds like “Born to Raise Hell” I am guessing). And don’t bother getting upset – my mother is no longer with us, but even I know the words: “She didnt get into heaven. Shes down in hell giving slurpees like the 7-11” aren’t serious. Moreover, W13, he doesn’t care.

The other new/old song as it were is “Screwdriver 2 – The Return” a redone version of another early track. It’s heavy, its violent, and its essentially a Rob Zombie tune.

The 15 minutes is rounded out with two covers and “Devil Inside” is an absolute gem. I am a huge Inxs fan, but what want from a cover is basically the idea that they make a song their own and W13 does that here, no doubt.

He does the same on the electric darkness of “Films” the Gary Numan song (featuring Calico Cooper), all of which means this is a glorious EP. One which in the old days would have had an “explicit” lyrics sticker on it, but now will probably cause a social media storm.

Welcome to the proof that music can still push the boundaries of decency – when its done right!