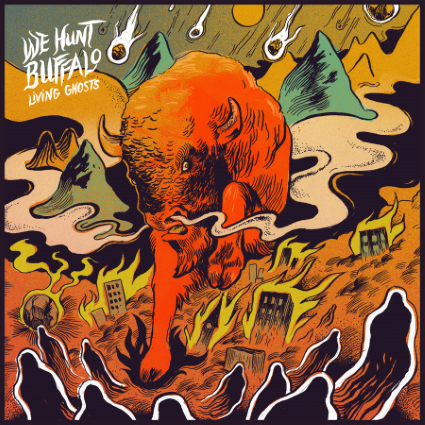 First impressions are important and all that, so sad as it might be, MVM was on board with We Hunt Buffalo even before we’d heard a note of this record. Here’s why: There’s three of ’em and you can count on one hand the amount of three piece bands that have ever sucked, ever. One of their number – bass player Brendan Simpson – has a beard that’d make Billy Gibbons high-five him in appreciation and they claim to make “dirty, grimy Fuzz Rock. If that’s not enough try this. Since releasing their debut EP in 2010 they won a talent contest that led them being on stage with the almighty Monster Truck. Not content with this (and if it was my band we’d retire) they’ve played a hometown gig with Red Fang and toured with Cancer Bats.

So yeah, “Living Ghosts” frankly had better be good to live up to that. Don’t worry, it is. In fact it really, really is.

There are some albums that get released that you almost know straight away the band doesn’t believe in, there are some which are hyped to the heavens. And then there’s others. Ones with a quiet confidence, a collection with a carefree air of an outfit that says: “yeah we know, we made the thing. It’s pretty cool huh?”

“Living Ghosts” is very much in the latter category. There’s a class, a composure, and a determination here. It begins in a rather epic fashion with the instrumental “Ragnarok” and it’s soon kicking ass and taking names. “Back To The River” comes crashing in with the urgency of someone who’d rather kick the door down than use the bell, over a riff that reeks of Midnight Ghost Train. “These are evil times” reasons Ryan Forsythe in its chorus, and he shows his versatility on “Prairie Oyster” which features a vocal delivery in the verse not too dissimilar from something Liam Cornier of the aforementioned Cancer Bats might attempt.

Everywhere else, though, Forsythe contents himself with singing conventionally and the record benefits hugely. By turns monolithic – “Comatose” would fight its corner against most – and mellifluous – “Fear” is a bluesy affair with some fine lead guitar work – there’s also a fine attempt at psychedelics with “The Barrens” which is hugely ambitious and quite brilliant.

As if to prove their versatility, “Looking Glass” is stripped back in its verses before a crushing middle section and the air of desperation which pervades the lyrics makes for a magnificent track, while the bass-heavy early sections in the closing “Walk Alone” give way to something approaching lilting.

Lord only knows how Canada does it. Quite how a country of less than 36 million people manage to have so many great bands across such a diverse range of styles, no one is too sure. Just be grateful that they do – and in We Hunt Buffalo here’s another one to add to the (long) list.

Sometimes, those first impressions can be right.