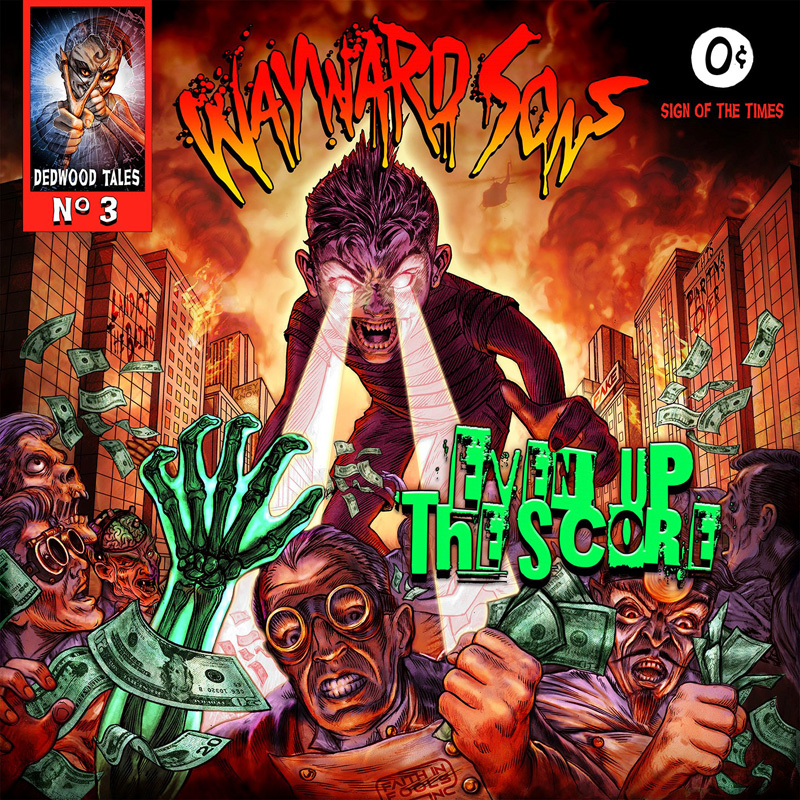 “’People tell me rock is dead? Looks like it, doesn’t it….’ On this evidence, Wayward Sons are coming for you and they aren’t going to stop until the job is done.”

I wrote those words on October 7th 2017. I was watching Wayward Sons for the first time. They were opening for Inglorious. Fast forward four years and a day (“Even Up The Score” was released on October 8th 2021) and, lets be honest here: Wayward Sons are up there with the best British based hard rock bands.

“….Score” is the third one that’s underlined that, and it’s their boldest, most ambitious yet, and it’s the one, as well where fans of frontman/songwriter Tony Jepson’s 80s work (I’d promised myself that I wouldn’t wallow in the past on this review, because this is a band that is looking forward with such vigour, so I apologise) will find themselves sucking a thoughtful tooth in reverie. “Big Day” brims with youth, energy, and my how Jepson – a few years older than your correspondent, but probably along with Ricky Warwick and Tony Wright, the first time a rock star felt like one of “us” back in 1989 – hits that note before the solo at his age….suffice to say, all of us can be taken back to “Kickin’ Up Dust.”

For this one, Jepson and the lads took a slightly unusual step of putting singles out when they were still in the recording process, the aforementioned “Big Day” was one, the other the title track, provides the strident opener in the end. Even here, when you heard them, you knew there was a slight change in direction afoot. The hooks were there, the lyrics were still full of social consciousness and discussions on the human condition, but it felt they were slightly heavier, slightly angrier might be a better way of putting it. “You might like it, but its rotten to the core” goes the hook on the opener and it feels as though that’s the world in 2021 – and Wayward Sons have adapted to reflect it.

Take “Sign Of The Times” for example. A truly wonderful song (not just the best here but the best of their career so far) it takes the ruling classes to task with a ferocity: “When the filthy rich corporate whores become heroes of the downtrodden poor” he spits. Now, I’d promised myself that I wouldn’t talk politics in this review either, but breaking more promises that a T**y manifesto is ok these days, right? That line, though, nails it. It’s precisely the biggest con of scum like Johnson and Farage – to convince the public that they are on the side of the working class. Back to music, and later in the song there’s a thought “they’ve killed our rock n roll,” and the solo which follows, with a real 70s glam stomp, hints at it being taken back.

What Jepson did so well with Wayward Sons was surround himself with brilliant musicians to carry the vision with him. Sam Wood on guitar is – as ever – a revelation. Chugging away on the catchy “Bloody Typical”, which has a real 90s flavour, or playing the lead on the superb, slower Beatles tinged “Faith In Fools”. Far be it from me to assume I know who the target of Jepson’s anger is here, but I am going to take a wild stab: the public for allowing one of the reprehensible pair that I mentioned above to hijack the discourse and for electing the other as Prime Minister.

A band with plenty of diversity, anyway, but one that’s ramped It up this time around. “Fake” comes with an insane chorus (and hand claps like all the best power pop) that honestly had me singing “I Touch Myself” by The DiVinynals (tricky at work, to be fair), while “Downfall” is built around a bass groove from Nic Wastell and it has serious intent and that’s before “Tip Of My Tongue” kind of marries the two together and does so in a more modern way than you might expect.

That’s what “….Score” does. It is rooted in the 70s and 80s – and all of us perhaps are – but is not a slave to anything. “Looking For A Reason” is the type of song that doesn’t need the words “core” or “post” anywhere near it. All it is, is pure rock n roll by students of it. Dave Kemp’s organ gives it a real Deep Purple touch, too.

A bold record, a brash record, not the sort of thing to go into your front room and sheepishly look at the ornaments. Instead its got its shoes off, but the kettle on and taken over. “Land Of The Blind” is a prime example of that ambition. The harmonies, the arena sized intent, if you will, are special, and its striking that there’s no “dropping off” at all. “They Know” has a solo that Scott Gorham himself would be proud of (and of course, if you are doing hard rock without a bit of Lizzy or AC/DC in, you’re doing it wrong, we all know that).

The last one “The Party’s Over” is a big old thing. You can see Bad Company doing it, maybe. Whatever it’s the most British thing you can conceive of: “they had their guts for garters” is surely the only time that’ll be used in rock n roll this year (ever?) but it’s a huge reminder of just how special Wayward Sons are.

They understand the past, but they want to be the future. Job done, then. “Even Up The Score” is more like being 5-0 up at half time – but they’ve been planning this for four years, after all.