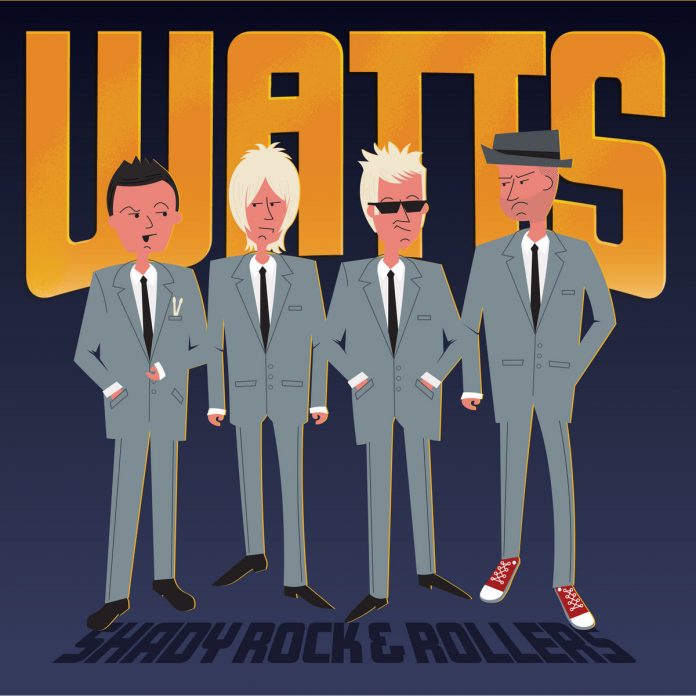 I am gonna let you into a secret. And its not just me, I don’t care what anyone says.

We all like to pretend that we want our favourite cult bands to be huge – we don’t. What we want is them to make their brilliant records just for us.

Like, I have seen The Wildhearts hundreds of times over the years, but the best gig I ever saw, the secret one they played at JB’s in Dudley once, billed as The Moodswingers, when they played two sets, it went on for hours and they played a load of b-sides. The sort of show, where to use a phrase, if you know, you know.

Which brings us neatly to the point. You see, Watts are the type of band where if you know….well you get the point.

They’ve appeared on the website many times over the last five years or so, usually with me saying things like “this is six minutes that reaffirms every reason you loved rock n roll in the first place” or something.

Now, they are here again with “Shady Rock N Rollers” and, brother, it might be the best of the lot, frankly.

Some of the songs on here have been reviewed on the other stuff. “Queens” is a glam rocker that would take you down a dark alley – dressed in spandex – and kick shit out of you (The Struts would kill for the low-slung Keith Richards riff) and “The Night The Lights Went Down” manages to sound so catchy that it makes The Dandy Wahols “Bohemian Like You” look like a lot of fuss about nothing. Then there’s “Done With Rock N Roll”, a track that sounds so not done with the sound that it would find that clown Gene Simmonds next time he says rock n roll is dead.

The key to all this, mind you, is the opener. “Loud And Fast” – and there’s a very real chance that the four of these have those words tattooed to them – when Dan Kopko sings “loud and fast, and hard as stone, that’s how I want my rock n roll” – and its hard to argue that they don’t deliver on this time and time again.

It’s also hard to decide which is the best song here too. It’s probably “Breaking Glass”, a track which – just when you think it can’t get any better – pops out  a Thin Lizzy riff to go alongside the ZZ Top one it messed with in the first verse.

Where this scores huge is the bass of Tim McCoy. Pretty much everywhere you look, there’s something underpinned by a strum that is as Sweet as it is sweet, if you get the point. “Heavy Metal Kids” gets bonus points for just that – and namechecking Iron Maiden.

I asked about the best song here: In fairness, it could be “Shady” (a single we had on the site) which gets bonus points for not understanding why all music doesn’t sound like Mott The Hoople. Mott get overlooked too often for my liking. I was at an Ian Hunter gig on his 78th birthday. Some sycophant in the crowd shouts “Happy birthday, Ian.” The reply: “fuck off”. Now that’s damn rock n roll. And so is this. Just don’t tell anyone else about it….shhhh!