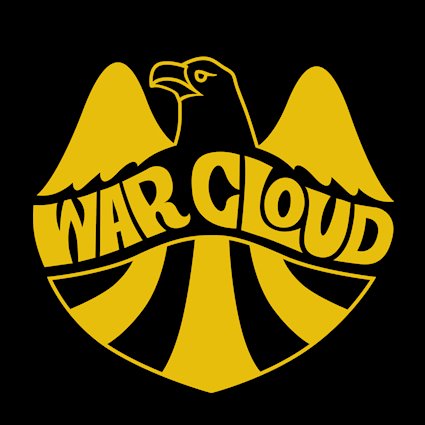 Think of Oakland, California, and if you are anything like us you immediately think Machine Head. Whilst it is true to say that one of Oakland based War Cloud (guitarist Tony Campos) used to be in a thrash metal band, then maybe these lines from the track “Hurricane” will point you in the right direction as to what the four-piece actually sound like.

“Rolling like a coaster, down the devil’s road,” sings Alex Wein. “A place where the weary need not go….”

Whilst you might not have a clue what those words actually mean, and in truth they may not mean a damn thing, they somehow make perfect sense here.

This is high octane and absolutely superb stuff. If Peter Pan Speedrock had got together with Thin Lizzy to jam on some NWOBHM tunes, then the chances are it would have been fun first and foremost, but moreover it would have most probably sounded like this.

These eight tracks fair old crackle with an electricity and smile with glee. “Give’r” for example kicks the thing off with Joaquin Ridgel smacking his kit with the power of Animal from The Muppets and it takes all of about 15 seconds to be into its first twin guitar riff.

The good news is if you like the sound of that, then there are seven more where that came from. If you don’t then there’s something wrong with you, but we’ll see you in about half an hour after we’ve done headbanging.

“Chopper Wired” adds a greasier and perhaps more Deep Purple groove – Wein and Campos trade licks as if lives depend on it – but the principle is the same.

This is a record that is firmly of the opinion that there are only two sorts of music – that’s both rock and roll – and Divide And Conquer occupies the same sort of hinterland as Dio era Rainbow, while “No Man’s Land” seethes with something close to rage.

“Red Witch” summons something a little Sabbath-y from the depths, but can’t resist some screeching guitar too, just because and “Speed Demon”? Well, what do you want a song called “Speed Demon” on an album like this to sound like? If you’re answer is like the Hellacopters first album and with all the subtlety of a kick in the nutsack, then to be fair you’re in luck.

“Vulture City” ends things with what amounts to a reprise of what has gone on elsewhere in the record. A dash of early Maiden here, a touch of the desert there, and a whole heap of fun. It would sound superb live, no doubt, and surely that is War Cloud’s natural habitat?

In 2002 the brilliant British band The Wildhearts released an album that luxuriated in the title “Riff After Riff After Motherfucking Riff”. 15 years later it is as if War Cloud have brought that idea to life. You may as well surrender now.