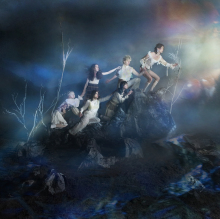 Walt Disco are a flamboyant goth-glam Scottish six-piece outfit based out of Glasgow who released their debut album `Unlearning` earlier this month. It`s an album that covers a variety of subjects and emotions.

The album opens with `Weightless` which singer James has shared is about gender identity. It`s a wonderfully anthemic number at times where you can almost feel a sense of shaking off the past and understanding where you want to be. There`s some superb crashing guitar riffs towards the end that accompany the breathy vocals as they build towards the climax of the song.  We have a number in `Selfish Lover` that came out of the tedium of  lockdown. It`s an almost high energy quite electronic cut that reminded me of Erasure for some reason. An amusing but so catchy composition.

`How Cool Are You?` was written by Callum Rankine, the son of Alan Rankine of The Associates. I only found this out after listening to the song and whether intentionally or not it does sound like a number that the sadly missed Billy McKenzie and Alan Rankine would have shared. It has to me the feel of the movie / play Cabaret and the sometimes decadent era of the Weimar Republic and especially the song Willkommen. Wonderful stuff. There`s a kind of disco-esque vibe to brief `Cut Your Hair` which will have you tapping your foot along to it.

The band describe `Timeline` as a song about those small “flings” everyone has, you go on three or four dates with someone, one or both of you get the dreaded “ick” about one another, you stop speaking but you never fall out so you’re destined to see each other on each other’s timelines for years because you never had reason to unfollow each other . I guess in terms of production it’s our take on bedroom pop. It`s a kind of dreamy quite mesmeric number that at times ebbs and flows as it evolves. There is a theatrical texture to `Be An Actor` which relates to an online flirtatious relationship that happened during lockdown and around some of the personal feelings shared and others that were imagined in the lyrical content. There`s a rolling ambience about the music allowing the vocals a platform to really express these thoughts and opinions.

`The Costume Change` is a musical interlude or soundscape and  I read that James felt the song sounds like Gender Euphoria and the overwhelming, terrifying feeling of happiness.  There were all sorts of electronic pulses and imported textures and segments shared throughout this piece. The track `Those Kept Close` was written about loved ones who have gone before us and a reflection on our own mortality. It`s a deeply introspective and reflective piece that needs a few listens and i`m sure was really cathartic to record.

`Hold Yourself As High As Her` is delightfully high energy and was inspired by conversations regarding sexuality and about finding and accepting  yourself as it can be equivalent to a religious experience.  I felt I heard a hint of New Order in the latter section of this opus.  There was almost a goth like nigh on Sisters Of Mercy vibe to `My Dear` which tells of a friendship that felt much more but was recognised that it would never work and has become a deep and lasting affinity.

`Macilent` was co-written with Jessica Winter in response to the violence faced by queer and trans people . it`s a quite grungy, noisy not aggressive but a sort of resilient call to arms or battle cry. The album closes out with `If I Had A Perfect Life` and it`s an almost larger than life submission. It peaks and flows and encompasses tributes to the Doris Day`s song `Secret Love` in the chorus line and touches on subjects such as death, memory loss through depression and ends with lines from a poem the singer has composed though creating the album. Musically it`s brilliantly eclectic with electronica,  ballad like segments, almost orchestrated slices and off kilter drum and bass splashes all kind of mashed together as it progresses.

`Unlearning` is a really interesting and innovative listen. A lot of the subject matter was completely unfamiliar to me but nevertheless drew me in and gave me some something to consider.  James Potter has a quite unique and rich vocal range but is more than ably supported by a talented band of musicians in Lewis, Dave, Jack, Charlie, and Finlay. My favourite band are Sparks and Walt disco really reminded me of them at times with their inventive style. There were also hints towards bands like Franz Ferdinand, The Associates and even Goldfrapp but maybe that was just me.

I`ve given up predicting where bands should be these days but I have to say I really hope Walt Disco excel.