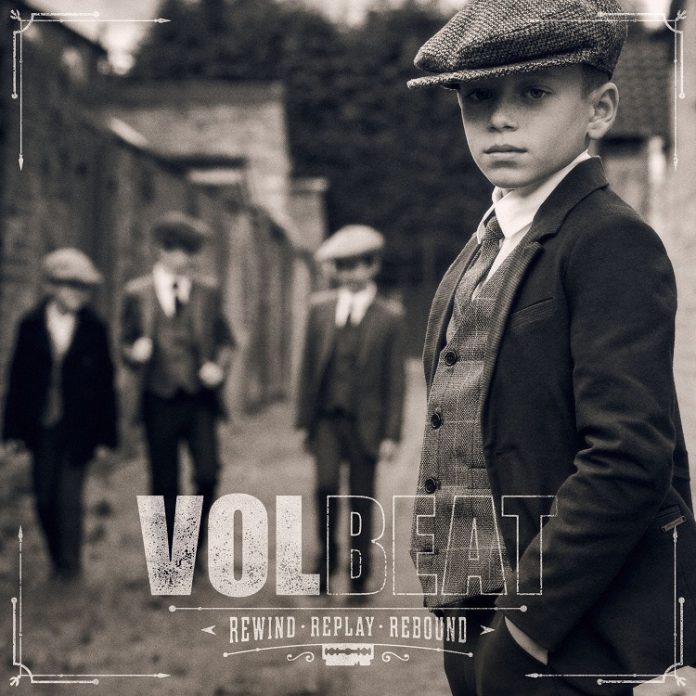 I’ve got a friend who goes mad with me when I say I am impressed. Apparently, you should never be impressed when someone does well as it meant you thought that they couldn’t do it.

So I had better, in that respect, say that the rise of Volbeat is “striking” rather than impressive, because, lets be honest, no one ever doubted them.

I remember seeing them back in 2013 and it was clear that the UK was finally waking up to their brilliance – and in that respect we were slow compared to the rest of the world.

Since then, it has been record breaking thing after another, Grammy nominations, opening for Metallica, all this culminated in the gig they played in Denmark, which was released as live DVD last year, which was the biggest crowd ever for a gig by a Danish band in their homeland.

So, no pressure then, as “Rewind, Replay, Rebound” is released. It has a lot to live up to. Not least the fact that the last “Seal The Deal And Lets Boogie” was incredible (I gushed a bit and gave it album of the year on this site back in 2016). Do you think they are fazed?

But there are many interesting things about Volbeat. Their sound being one. They are one of those bands with a signature sound. But like all those type of bands, they don’t sound like anyone else, not exactly.

About a decade ago a mate handed me a CD he’d made. “You’ll like these,” he said. “Sound like Metallica playing Johnny Cash.” Yeah? Nah, it ain’t gonna is it? Thing is, it did. It still does. Sort of.

Volbeat 2019 is best summed up as this: on “….Rebound” there are two special guests. Clutch’s god-like Nell Fallon is one. And Exodus/Slayer guitar hero Gary Holt is the other. Somewhere, in some parallel universe, those two might be in a band, and if they were it sounds something like this.

A lengthy record (in that it has 14 songs, not so much in time) it starts in a pretty poppy way. The opening of “Last Day Under The Sun” had me thinking Bryan Adams, and it does a soul-filled backing singer thing that is more akin to Lynyrd Skynyrd. That said, it is unmistakably a Volbeat song.

There is something comforting about that too. Because whatever textures, twists and turns it has, everything here sounds like it has been marinated in their particular hot sauce. So the raging rock n roller “Pelvis On Fire” races about at a million miles an hour – and you’d best believe it knows its 50’s rock n roll – but when Michael Poulsen sings “Oh baby put it there”, (what is going where, who knows?) it could only be them.

Certainly, there are bands that don’t have to work at being “cool” whatever it means. There is something inherently “cool” about Volbeat. They make class look effortless. “Rewind The Exit” glides round like one of those footballers who make it look easy before pinging one in the top corner, and however good you hoped a duet between Volbeat and Neil Fallon was going to be, then “Die To Live” is better than you dared dream. There is a moment when the piano and sax kicks in and rock n roll might just achieve perfection. Song of the year so far by a long way.

And this is more nuanced than you might think too. “When We Were Kids” is initially a summer filled ballad, but then it takes a grandiose swoop into something close to power metal, “Sorry Sack Of Bones” is all angular guitars, post something or other to clever clogs, but sounds like Therapy? to me and “Cloud 9” just sounds like a band that is comfortable in its own skin and right on top form.

“Cheapside Sloggers” – the one with Gary Holt – is glam in the style of Suzi Quattro rather than Poison, but it stomps about brilliantly, and the mighty drums of Jon Larsen propel “Maybe I Believe” towards something mighty, while the 37 second punk freak out of “Parasite” is as different from that as can be.

There is nothing not to love about any of these, and no dips in the deep cuts where “Leviathan” chugs, the keyboards make “The Awakening Of Bonnie Parker” something a little different – and this one actually is particularly radio friendly.

Actually, this is balanced out by the thrash stylings of “The Awakening” and guitarist Rob Caggiano seems to have dusted this off from his Anthrax days. Certainly, if you are going to get one caught in a mosh, as it were, its this one.

An example of the variety in this work is shown, perhaps best, in the shimmering love song, “7.24” which provides a sweeter end than you might imagine.

All of which adds up to yet another collection of brilliance from Volbeat. Which, depending on how you look at it, is either impressive or par for the course.

Previous article
ARTIST OF THE DAY: DARRIN BRADBURY
Next article
DOH, RAY ME