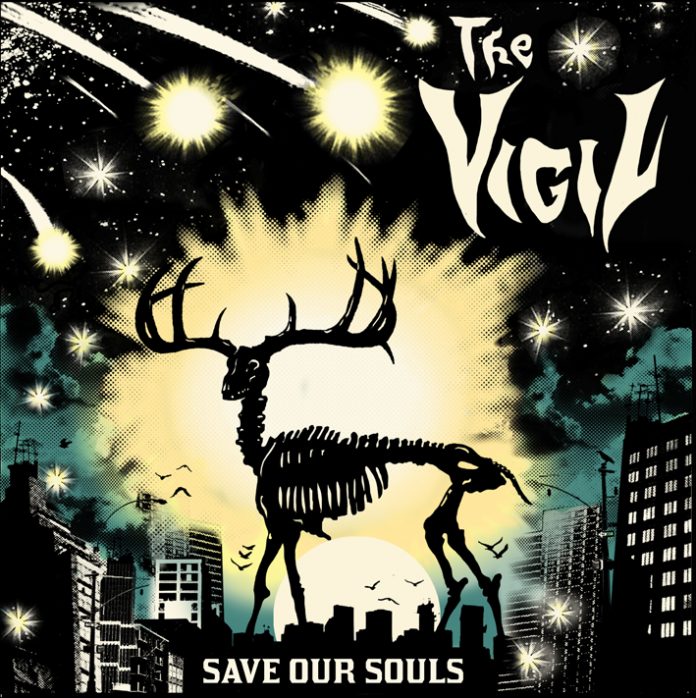 2016 is a bit shit. Lemmy’s dead, he’s jamming with Bowie, we’ve got chaos over here, which post Brexit means its all the fault of the poor (at least we think that was what Farage meant with that poster) and over the other side of Atlantic God alone knows what they were thinking.

But fear not. Apparently its now the late 1990s. So this means we can expect to see Tony Bliar (sic) coming into view any time soon. At least, that’s how it seems if the debut album from The Vigil is anything to go by.

“Save Our Souls” gives all its clues away by it’s producer, oddly. Nigel Pulsford  – the prodigiously talented guitarist in Bush – is knob twiddler here, so you know what this is going to sound like.

An actually that’s ok, because whilst the late 90’s as a kid in their early 20s was rather rubbish, the likes of Therapy? Everclear, Live and Counting Crows were absolutely, definitely, completely singing songs about a girl who MV might have worked with, so yeah actually thanks for transporting us back to those times, you bastards (totally over her by the way, totally…..)

But away from the private hell (and don’t start us on what The Trews song “Misery Loves Company” means from about a decade later) and onto the music, “Save Our Souls” doesn’t half wear its influences on its sleeve – and “Find A Way” doesn’t half sound like Puddle Of Mudd  – but is so ferociously entertaining that it doesn’t matter.

Starting as it means to go on with a dark riff and a pulsing bassline to kick off “All You’ve Done” it does that thing that Bush used to do all the time, with the bass line matching the vocals in the verses, giving the effect that makes its seem like arena rock.

“Black Arrow” is more of the same, but has more than an echo of STP as it does it’s work, “Nothing Sacred” on the other hand boasts a mighty hook, “Do You Feel Alive” has its eyes on radio play – and in fairness is deserving of it too, given that it’s more grunge element is perhaps the best thing here.

Pulsford has done a great job of making this sound like the most polished thing you could hear, “Hell To Pay” broods with the appropriate balance of self-loathing, and if it gets compared to Nirvana then you’d imagine nobody would be too shocked.

“Liars Chair” does a nice line in unsettling rhythms, “No One Wins” is as insistent as you like, but it’s the likes of “Absinthium” that show that although this their debut The Vigil are not learning their craft as such. Playing in bands for getting on for 20 years, the friends here are tighter than the proverbial and their skill shines through.

At their very best when the shackles come off a little, and at their very best they are pretty formidable, “Feeding Time” is a classic slab of what we probably have to call post-post grunge and the lead guitar work from Robbie Schuck (which is excellent throughout) really shines on “Know What You Are?”

And as things end with the record’s only ballad “Turn The Tide” the thought is here that The Vigil might just be here to stay, especially if they evolve slightly.