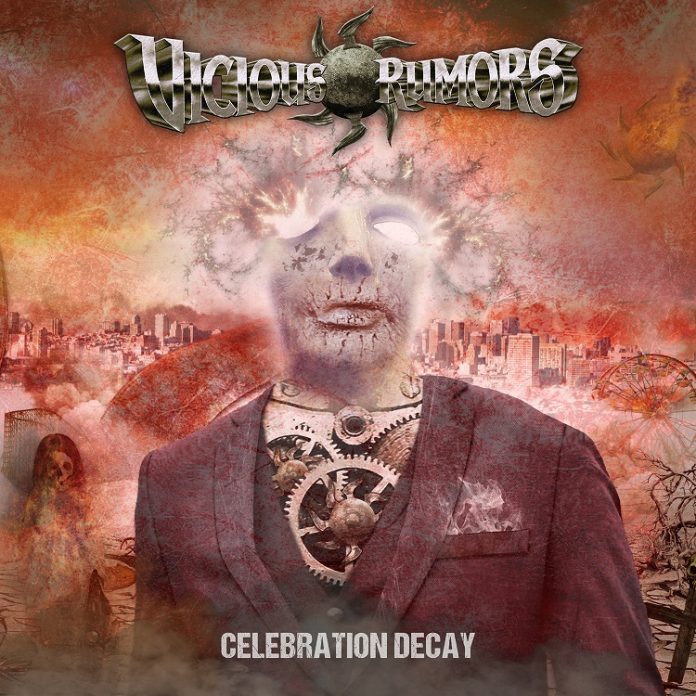 41 years into their career, quite frankly, you could forgive Vicious Rumours for being jaded. A history best described as “labyrinthian” (tortuous would be another word) and various peaks and troughs in their evolution have never dulled the bands ability to make music that frequently belonged in the top draw.

Records from the San Francisco band have never been massively prolific. By my count “Celebration Decay” is the 14th from Geoff Thorpe’s men since 1979, but there’s something to be said, after all for quality and not quantity, and lets get it said from the off that this one is one of the very best they’ve managed.

Chief reason for that? Well, for this one there’s another new line up (of course there is) but this time the two new boys – singer Nick Courtney and impossibly young guitarist  Gunnar Dügrey (21 years old!) – have injected so much life into this, its incredible.

In many ways – although Thorpe handles most of the writing, as you’d expect – this is their record and the metal here is so fresh, but without being achingly modern.

The opener, “Celebration Decay” itself should be enough to let you know whether the record is for you or not. There’s a kind of thrash overtone (they are from the Bay Area after all!) and the riffs slash. Then Larry Howe’s drums pound. Then….

Well, then Courtney’s vocals slam. Like a young Bruce Dickinson, his range is beyond mere mortals, and the hooks that he’s given to sing by Thorpe really showcase this.

Joining the long standing Howe in the engine room, as it were is Greg Christian, of Testament who handles bass duties. Thundering as Courtney paints the apocalyptic ideas that infuse the track.

“Pulse Of The Dead” is more of the same – and it’s meant as no criticism to say that most of them are. There are touches of Testament and the likes all the way through it. But what there is, is a trademark metal sensibility.

This is heavy, however it is never inaccessible. “Arrival Of Desolation” has a proper metal gallop. They’ve saddled up here, but it’s never trad. Indeed, this is the sort of band that you could see at Bloodstock (surely their natural habitat) and might well be the band of the day.

There’s a crushing element to “Any Last Words”, but then there’s some slide guitar too – and somehow it all fits. The lyrics are muscular, confrontational and aggressive and they match perfectly.

“Asylum Of Blood” is slower, heavier, and is balanced out with “Darkness Divine” and its acoustic tinge. Courtney sounds like he’s gargling sandpaper here too, as it builds and soars. Not for nothing, do you suspect that this was the centrepiece of the collection.

No weak points either. Whether its “Long Way Home” with its interesting delivery, the fists in the air fury of “Cold Blooded” or the more pure almost power metal of “Death Eternal”, they are all shot through with quality.

This, a little like label mate Axel Rudi Pell, is an album that students of guitar will love and it certainly feels like the band had fun making the likes of “Collision Course Disaster”, they seem to have released the handbrake and just gone for it. It is one of many that starts with a guitar solo, as if they just wanted to cram them in.

Indeed, as it finishes with “Masquerade Of Good Intentions” – one which like the others is a modern sounding take on what many would have done as some trad thing stuck in a time warps  – you are left thinking that it has basically underlined what is so good about the album as a whole.

A band that can celebrate anniversaries with the best of them, with this new line up and slightly updated sound, Vicious Rumours have given themselves every reason to look forward. Not so much decaying as regenerated, you might say.