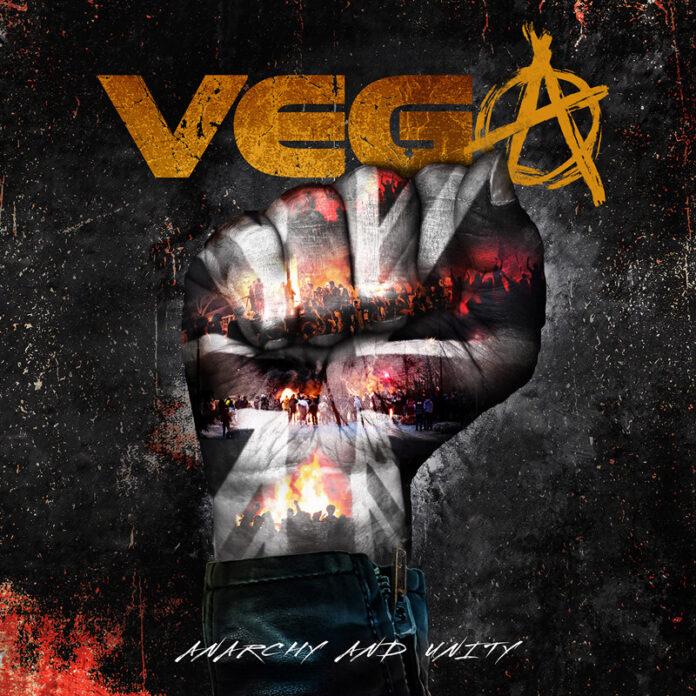 June 12th 2020. The world was a very different place. We were in the grip of a pandemic, there was uncertainty all over the place, and no-one knew what the rules were – and those that made them weren’t going to follow them. So glad that those times are behind us as we enter 2022.

Such facetiousness aside, on that day, I wrote this about a Vega record: “Grit Your Teeth” is the heavy, muscular, yet crunchy collection they’ve always hinted.  The record that is going to put them amongst the big guns in British rock – at long last.”

So, on December 20th (and “Anarchy And Unity” has been out for a couple of months) I am almost bound to say the same thing. With the simple caveat that, the thing is the best record of their career.

Clearly, Nick Workman and his boys used the time when they couldn’t tour to write some songs, because there’s no way on the planet that work as good as the opener “Beautiful Lie” was left over from the “Grit…..” sessions.

This is as punchy as they’ve ever been – and the guitar riff after the first chorus? I can’t be the only one who thought they were going to break out into Michael Jackson’s “Beat It”, surely.

What they’ve done so well on this collection is write a load of tunes that are made for aggression. Controlled, of course, “Sooner Or Later” isn’t going to get a moshpit going, but it is energetic, and it’ll get fists up in the air (I can attest to this having seen them on their recent tour).

That all being said, they’ve also never forgotten who they are, either. They’ve always struck me as a band with similar tastes to my own, and perhaps with a similar introduction to music given that I am assuming we are similar ages. To that end, they’ve always mixed the hard rock with a bit of prog and pomp. They once toured with the mighty Magnum, and Bob and Tony’s troops would be proud of “End Of The Fade” themselves.

Yet again, though, you can listen to “Ain’t Who I Am”, the massive sounding quasi power ballad “Welcome To Wherever” or the “Bring The Riot” and hear a band that seems to be infused with a brand new vigour. Maybe that’s because they’ve got a couple of new members, whatever Billy Taylor has done more than bring the average age down. He is a fine guitarist, as anyone who saw Inglorious with him (and crucially without him) can agree. Pete Newdeck has drummed with everyone, and is in supreme form here too.

The centrepiece of the record, probably, is “Live for Me” – a ballad that they played on the tour – and which sees James Martin’s keyboards take centre stage. A glorious slow building thing, they follow it with “Kneel To You” and the almost punk anger of the words is wrapped around a hook that is so pleasant it could get on radio 2. If I had to guess who it was about, then I’d wager it’s a tubby posh prick who ate cheese and drank wine with all his mates at around the same time the rest of us couldn’t see dying relatives (and yeah, I perhaps should leave my personal politics out of these things).

Another thing you can’t overlook when it comes to Vega is just how modern they sound compared to all retro bands that pass for hard rock these days. In many ways, “Glow” casts them as outsiders in this current crop. And if “C’Mon” does have a big old, swinging groove, then it’s on own its own terms. Likewise, “Had Enough” might look back to 80s AOR for its inspiration, but make no mistake, there’s nothing dated here.

The last one “2Die4” is something close to a ballad, but it builds into something that the likes of Neonfly would kill for, and the versatility of Vega is perhaps never better underlined than right here, in the thunderous drumming at the end.  So ….its heavy, muscular blah blah blah as a wise man once said on this website, but “Anarchy And Unity” Is so much more. It feels like – after almost a decade – a statement. If it is, its one of real intent.