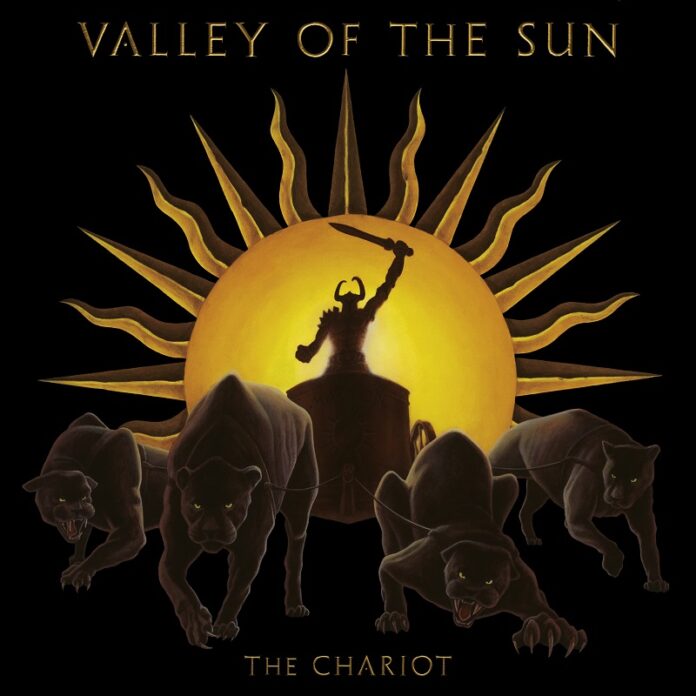 A friend of mine is the type of person that if you give her something new to listen to, she’ll immediately tell you she won’t bother and go back to listening Planet Rock or some Kiss record she’s heard a million times before.

That’s not for me. Never has been. My thing is always the next thing. That’s why I do this night after night. I stated MV nearly eight years ago, and back then, I’d have considered it a success to have anything on these pages that was on the Ripple Music label.

They had a band called Stone Axe on their roster. They were one of the bands that convinced me to start a website in the first place, but things move on and tastes change. It’s not that I don’t like riff based rock n roll these days, its just with the constant slew of stuff we wade through each day, things get pushed to one side a bit.

Which is a roundabout way of saying that there is a very definite feeling of returning to roots about “The Chariot”.

Indeed there is for the band too. Valley Of The Sun have never been the type of “stoner” band to fit into the neat desert box, and they aren’t here either. “The Chariot” is much more a straight up rock n roll album than 2019’s brilliant “Old Gods” and it feels like they want to make that point early doors. The opening riff to “Sweet Sands” thunders. It rumbles and is a danger to anything that isn’t nailed down. Yet, as ever, there’s a melody. Ryan Ferrier and Josh Pilot lock into their guitar grooves and away we go.

That’s basically it. Except there’s one other thing and you can’t get through a VOTS review without talking about it. Ferrier’s voice. My goodness. He’s sensational. He’s always sensational. But “Images” is going to have you looking for those early Soundgarden records you loved.

Yet for all he sounds like Chris Cornell (and he really, really does) the band are very much not copying anyone. “Devil I’ve Become” has more energy than a three year old binging on sugar, and the title cut (and you can bet that these boys are the type of people to call them ‘cuts) builds and explodes – and whoever is playing the solo is some kind of guitar god.

Their best work to date, the consistency of these songs is what strikes you, as does the light and shade contained amongst the collection. “Headlights” drives forward, built as it is on the bass groove of Chris Sweeney, but the next one, “As We Decay” sort of lurks, hiding in the shadows to commit its attacks.

There’s an odd kind of funkiness too. Corrosion Of Conformity might construct something like “Running Out Of Love”, and it all comes to a glorious head on “Sunblind”. More than one of the best songs on this, its one of the best songs I’ve heard for quite a while. Sweeney plays keys here and does so with great effect.

Clutch fans probably need to get themselves to “The Flood”. Or Crobot nuts at a push. Whatever, if you like your blues greasy and beardy, then knock yourself out.

And if “Coliseum” sort of ends where we began, then it does so with a little bit more Alice In Chains than the opening session had.

I am – usually – a lyrics man. I pore over words. With this, no. The lyrics are excellent, but honestly, this is about the power of guitars, bass and drums to move people. I can pay “The Chariot” no higher compliment than to say it reminded me why I love reviewing music.

Previous article
BAND OF THE DAY: STORMBOUND
Next article
ON THE HORIZON