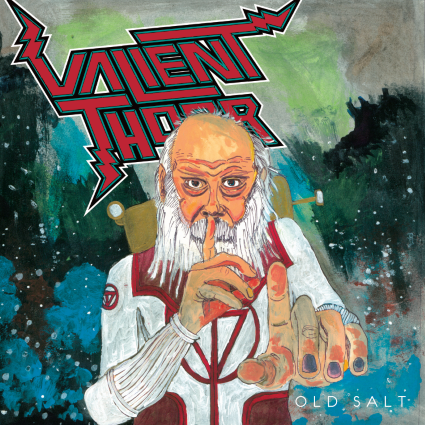 Don’t bring no pistol, this is strictly a sword fight

It’s not news really to suggest that Valient Thorr aren’t necessarily, well, sane. After all, they did originate for Venus and since crashing to earth in 2000 they’ve now racked up eight albums since finding themselves in North Carolina unable to get home.

The eighth of these, “Old Salt” starts – for them – in what is a reasonably conventional fashion. “Mirakuru” doesn’t need preamble. Instead, it cheerfully boots you in the nutsack right from the off and before the end its fired out about a million riffs, more guitar solo’s than many bands manage on an album, and singer Valient Himself has screamed “you’re a dead man” to no one in particular and worked himself into a frenzy of epic proportions.

Business as usual then, in fairness.

In this context, then, we probably shouldn’t be surprised that the next track is “Lil Knife” a bluesy punk shuffle, during which Himself informs us that he and his knife are on the warpath.

Suitably primed and ready, they race about like a Clutch after a night on the whiskey on “Cut And Run” and “No Count Blues” is three minutes of something as dirty as it is primal.

It’s to the bands credit that for all the barmy back story and sci fi leanings on work like “The Trudge” this is no comedy bullshit parody. This – as always with VT – is proper rock n roll. “Worm Up” does the loud-quiet-loud thing pretty handsomely, and the brilliant “Spellbroke” races off down the nearest fast line on the back of a downright thrilling riff “when it gets tough, I don’t care/this cat is hanging in there” suggests VH as though he’s trying to reassure himself.

The opening to “The Shroud” is arguably the heaviest thig here, but in typical style it cannot resist subverting the process and adding some spoken word stuff just for grins – indeed, the thought that in another life – hell, in another parallel universe – Valient Thorr could have been a mighty fine prog rock band isn’t too far away throughout.

But make no mistake about it, Valient Thorr know exactly how to write kick ass rock n roll songs like the superbly simple “Looking Glass” and “Jealous Gods” with which they close the record. If that isn’t enough then in-between all the bluster comes a gorgeous Led Zep-esque acoustic strum, “Linen Maker” and they probably don’t make them like that on Venus.

That planet’s loss has long been our gain, and maybe now they can call Earth home?