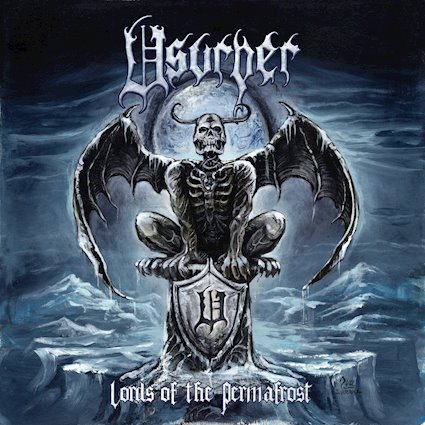 Chicago metal heroes return from a 14 year self-imposed exile to remind the modern scene of what they have been missing with their sixth album.  Has the metal world missed them?

In terms of the band lineup then changes have been made in the bass department with Scott Maelstrom coming in and replacing Jon Necromancer.  More obvious would be the return of vocalist Dan Lawson and his pipes burn across this album.

“Skull Splitter” is the first statement of intent from a band eager to make up for lost time.  From the acoustic beginning to its fiery full paced rhythmic battering and eventual mid pace last third it is a timely reminder of the power and controlled death-tinged metal that became the bands trademark.

One of the albums highlights comes with the second track “Beyond The Walls Of Ice” which is one of the best tracks they have committed to tape.  A barn stormer of a track that showcases the band unrelenting will and crushing intent backed by thunderous rhythms and razor sharp guitar lines.  Similarly the title track carries on the momentum and delivers us an ice cold vision of where the band have come back to after their self imposed exile.

There are no missteps here.  Each track is carefully and brutally constructed and delivered with raw power and energy that many newer bands would struggle to match.  “Mutants of the Iron Age” is a fitting finale that confirms what the previous eight tracks already revealed.  Usurper are back and they are bigger and better than ever.

If the metal world did not know that they had missed Usurper then one listen to Lords of the Permafrost will confirm that missed they have been and it is a glorious return to the fold.