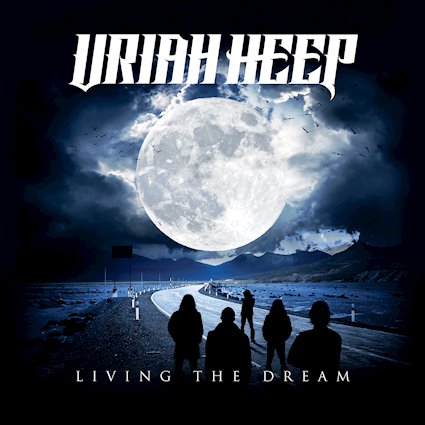 Earlier this year, like many other people I decided to go and see The Rolling Stones because “they ain’t toured for ages and won’t be around forever…”

So good were the band that I decided to go again later in the tour. As I was driving home from both gigs, I found myself musing on why seeing the old, classic bands is often such a rewarding experience, and came to the conclusion that even allowing for the songs, it is more – surely that if you’ve been doing something for half a century then, surely, it is second nature.

It was in this spirit that I approached this – the 25th album, no less in Uriah Heep’s career. The band, with Mick Box at its heart since 1969 has largely been pretty settled in fairness since 1986, which puts them at odds with many bands of their vintage, as does the fact that they’ve mostly managed to keep the band alive in that time.

As Box himself noted in the run up to the release of “Living The Dream”: “The mighty Heep are proudly able to tour in over 61 countries” which is not to be sniffed at. The good news, for both Heep and for those that love the band – whatever period they found them along the journey (in the interests of full disclosure, 2008’s “Wake The Sleeper” in my case) – there is enough here to keep them on the road for a good few years yet.

Indeed, right from the start of “Grazed By Heaven” it is evident that “…Dream” is from the very top drawer of UH’s work. It is typical of their sound, which personally, I’ve always thought was somewhere in the middle of Deep Purple, Magnum and UFO, to make something entirely their own.

In many ways too, “Living The Dream” is an album driven by the wonderful organ work of Phil Lanzon, who absolutely propels this in a way that latter day Europe might try.

Likewise, the title track, which begins with some Queen-style harmonies and a gritty, almost bluesy groove is a cracker, and the opening Box riff to “Take Away My Soul” is perfect, and very British sounding, hard rock, before it changes gear with some Beatles style swirl.

This record crackles with an energy, and maybe it is just the fact that everyone here knows it’s a cracker, but also the choice of Canadian Producer Jay Ruston (who has worked with the aforementioned Europe as well as The Winery Dogs, Stone Sour and Black Star Riders) seems to have injected a real freshness.

The likes of the thrilling “Knocking At My Door” – a real highlight – and the epic prog freak out of the eight minutes plus of “Rocks In The Road” are both indicative of a band that was brimming with ideas (and I’d be willing to bet that outtakes from this would make for a damn fine album, never mind anything else).

There are touches of Led Zep about the melodic “Waters Flowing” – as singer Bernie Shaw shows his class – and the slow building, brooding “It’s All Been Said” is the sound of a whole band firing on all of its cylinders, and the piano work here is enough to make Avantasia jealous, while the lyrics lament the modern world. The modern world, though, can’t be all bad when people make music like this.

“Goodbye To Innocence” has a kind of “nudge, nudge, wink, wink” student sleaze, but its filthy boogie is a lot of fun, while modern bands – I am thinking of Inglorious here – will do well to listen to “Falling Under your Spell” and understand how you do this for nigh on 50 years.

As it all ends with the reflective “Dreams Of Yesteryear” – “let me tell you how it was, so many years ago….” Sings Shaw as its opening line – you are struck by the fact that this is the first time anything in this collection has slipped into a reverie.

“Living The Dream” is not the sound of old men sitting around telling war stories. It is the sound of a wonderful hard rock band playing some magnificent songs. There’ll be some kid, somewhere who’s never heard of the band who finds this and loves it. That, right there, is why Uriah Heep – and other bands of similar vintage – are still vital.