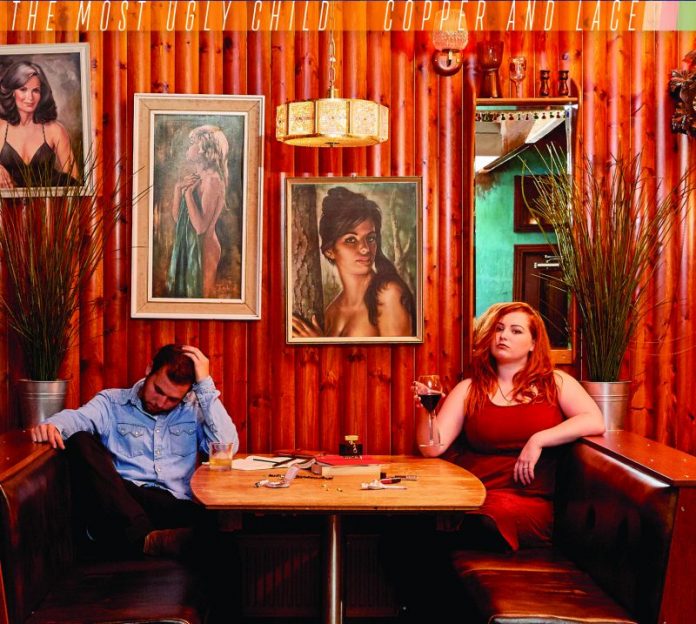 When you think of great Americana or Country And Western, in all honesty it’s unlikely you’ll imagine it would come from Nottingham. Middle America, perhaps, but not the middle of England.

That is about to change, though, and it does so because of The Most Ugly Child.

The East Midlands collective revolves around the songwriting pair Daniel Wright and Stevie-Leigh Goodison, who have teamed up with a selection of the best players in the area to make their debut full length “Copper And Lace” – and the results are quite stunning.

The 12 tracks here kick off in playful style with “What Have Might Been” (and any record that begins with the line “I could have been a model if it wasn’t for my face” has to be a cracker, right?) and like the best country it hides its message – essentially to stop wishing for what you haven’t got – under the framework of the familiar and that is basically the blueprint for “….Lace” in general.

There is a timeless quality about the record that will appeal just about everyone with this music at heart. “Golden Gates” for example is a Lap Steel drenched shuffle, while it is equally adept at the downbeat, folky stuff too. “Roses” – to these ears anyway – is akin to the work of latter Mark Knopfler albums in the way it builds its characters.

“Paper, Linen, Cotton, Lace” sees Wright and Goodison duet to great effect across a time signature that doesn’t do quite you expect, while “Lungs” brings with it the type of feel Springsteen tried to evoke on “The Seeger Sessions” record.

There is a desolate quality to many of the lyrics here. “Just Another Lesson In Pain” is full of heartbreak, but this juxtaposed by a trip to the Honky Tonk with “Long Gone Woman Blues” and its these twin attacks that make “Copper And Lace”  so special. Indeed, when this is coupled with Most Ugly Child’s ear for the traditional – “Today, You Said Goodbye” being a key example of exactly that and sounding like the songs your Nan would have played (if she was anything MV’s anyway) – it is tempting to think you are dealing with special talents here.

“The Bottle And Fall” brings the hard drinking that isn’t ever far from the thoughts here, right to the fore, and “Those Were The Days” is an expansive tale of treasured memories that combines country with a laid back sort of West Coast vibe.

And there is a quality to the songwriting here that is rare in its skill. “Queen Of The Honky Tonk” is a brilliant piece of imagery-filled prose, never mind a great song, and “My Pony” nothing more than a gorgeous little strum.

So, whether you imagined it or not, there is a magnificent country and western record being crafted in the east of the English midlands – and Most Ugly Child have made something beautiful indeed.