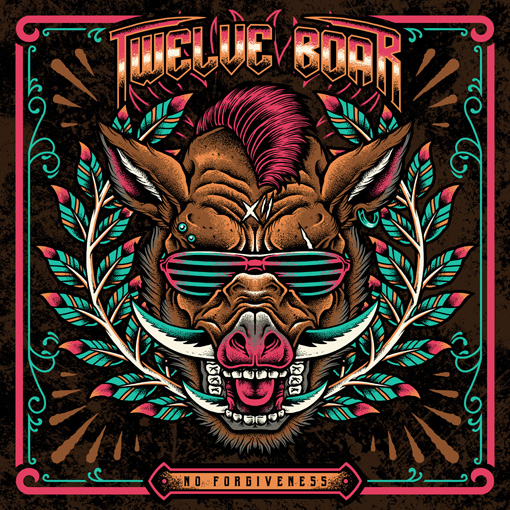 Tales from the underground. Just don’t ask them for guestlist ticket……

“The biggest fail is never to try….”

Whilst MV doubts very much that Twelve Boar are the types to have a mission statement (surely too much like corporate bullshit?) those six words do seem to be a little more than just a line on the opening song of this, the third album from the Aldershot-based bruisers.

“Steppin’ Up” deals with the struggles of an underground outfit. “I heard your band was playing on the Sophie stage this year/can you get me on the guestlist and I’ll buy you all a beer….”

The response is as brilliant as it is acerbic. “I never saw you at a show, nor sold you a CD” sneers Tommy Hardrocks (probably not his real name) “but our tunes are all on Spotify so you get them all for free….”

Welcome to the 21st century music industry, ladies and gents.

But as mighty as that song might be – and it really is, think Orange Goblin in a rancid transit van if they hadn’t changed their pants for a week – the three-piece can’t stay too serious for too long.

The roman numerals might be gone (XII Boar was to highbrow for us anyway) but the southern fried party is still in full swing. “Golden Goose” for example is Terrorvision’s “Pretend Best Friend” with a dirtier groove, and “Curtain Call” makes life on the small hall circuit sound like the most fun anyone can have.

And you know what, it probably is!

The title track is Southern blues the way Whiskeydick do it, and Hardrocks invokes the spirit of one Sir Lemmy Of Kilminster as he gargles “if you complain then the door is that way” in a way that really suggests you might not want to test his patience.

“Elders From The Deep” kicks off like some grindcore thing, before swapping Napalm Death for a cross between thrash and Sweet’s “Blockbuster.” And if you think that shouldn’t work then just to listen it first.

As always with the band, though, they are absolutely at their best when being completely carefree and playing Southern Fried metal at breakneck speed. “Snake On A Lead” is their sound bottled, and “All The Heavy Griftin’” lifts the lid once more on just what it takes to be in a band like this, but then if you would just rather enjoy its brilliant lead guitar, then you can do that too.

It even manages to end with a song you just know would be magnificent live – a habitat that is TB’s natural home – and “Hellspeed Truckin’” is yet more pure escapism. A song for all those with a dream, plenty of talent and a desire to be “packin’ a suitcase, avoiding the rat-race” everywhere.

That last one has the same carefree, yet filthy vibe that a Wildhearts b-side used to back in the day and there is a similar air of independence and whiff of danger about Twelve Boar too.

Like their own song says, one of the UK’s biggest bunch of triers. And here they are taking another leap forward.