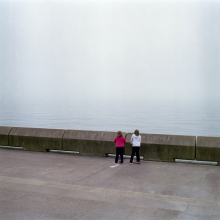 TV Priest have been hailed as the next big thing and having loved their debut album `Uppers` it was a declaration that to me, was pretty well justified. The band however felt the weight of this tag and it created a period of internal introspection and re-evaluation. Thankfully, this period passed and the band release their second album `My Other People` this month. The band have shared that this album “is a more ‘open’ set of songs, both musically and in our themes; in the process of writing, we found ourselves talking about things other than anger. We wanted to discuss love, loss, and joy too. It’s a record about personal disintegration and destruction, but also rebuilding again after this. It’s also heavily rooted in place, the music being a very direct response to Britain and England in 2021, but in a more abstract and textural sense. A muddy field viewed from a train window between cities, a patch of wild flowers growing next to a motorway, sticky carpets in a suburban flat roof pub, pissing rain on an August bank holiday and the smell of diesel in an out of town supermarket car park. An angry, hopeful, shitty, beautiful island”.

`One Easy Thing` opens this release and  the group have shared that it`s about “dealing with the small things of everyday life: the anxiety, pressures, and battles inside your own headspace”. It`s a delightfully hypnotic rolling, churning sort of stream of conciseness set against a spellbinding musical backing that feels quite restrained. We have similar in `Bury Me In My Shoes` but the vocal delivery does seem more antagonistic or maybe just frustrated. Again, the band have said that it`s a reminder to hang on to good things; to remember you can love and hate in equal measure.

`Limehouse Cut` is a song about feeling dislocated and displaced in an urban space you once felt you knew and ‘understood. A kind of spoken word poetic reflection which felt a little disconsolate but had an underlying attractive honesty. There`s an almost belligerence about the musical platform supporting the lyrical outpouring of `I Have Learnt Nothing`. Another sort of spoken word truthful diatribe.

‘It Was Beautiful’ is a love song about the past, present, and future. A reminder that love is the most essential thing. It moves along at quite a fast pace and is a reflective maybe introspective view on tines gone by. In the latter part of the number, it almost sounds like Charlie Drinkwater is overcome with emotion as the track almost halts to allow him to share his passionate sentiments. This composition was certainly beautiful. There a brief stripped back acoustic submission with `The Happiest Place On Earth` where the singer`s vocals are spliced and  almost challenging each other as the piece progresses. I think I’ll let you decide if the title is sincere or not.

Just when I thought title track  `My Other People` was an instrumental offering, the vocals kicked in over this kind of off kilter mesmerising submission which seems to suggest that the narrator just wants to be left alone after trying to be all things to all people. There seems to be in `The Breakers` a subtle reflection or re-evaluation on what you once thought was important in life but no longer is, apart from the friends you have. The musical backing is wonderfully compelling and adds a superb poignancy to this contemplative life assessment.

`Unravelling` is another observational piece which seems to be an almost a day in the life of somebody who seems to be coping but closer to the surface are unravelling or crumbling mentally. The accompanying music adds fuel to the fire as it builds in an almost Gang Of Four texture before fading at the death. I was left thinking is this real or imagined. We have another pretty fast paced rhythmic riveting number with `It Was a Gift` which again seems to express a disturbing inner monologue brought to the fore.

`I Am Safe Here` is quite stop start but that`s what seems to make it all the more transfixing for me. This album closes out with `Sunland` a quite relaxed, unhurried nigh on languid piece to end on. I wasn`t sure if lyrically, it was some kind of metaphor of life ambition that hinted towards Icarus, who in Greek mythology died because he flew too close to the sun.

I have to say that `My Other People` is stunning and somewhat different to the band`s debut album but to me it seemed to be almost a more mature submission. Vocalist Charlie Drinkwater delivers the lyrical content in an almost spoken word, free association, or chain of thought fashion at times but the powerhouse of Alex Sprogis, Nic Bueth and Ed Kelland really flushed out these tracks and gave them life. The lyrics I found could be interpreted in a number of ways or if you so desire not at all.

I loved last year`s `Uppers` but `My Other People` brings us to another level.

This is potentially my album of the year. I`m sure it may become yours to.