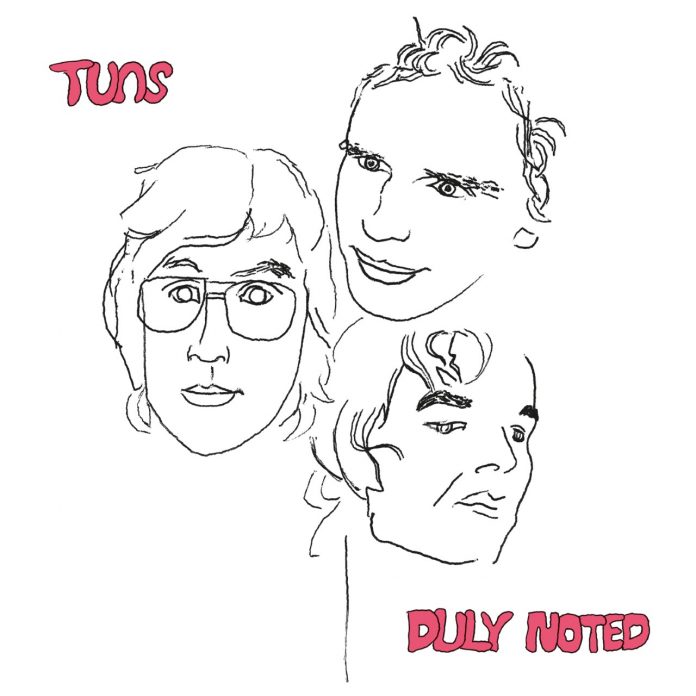 TUNS is a Canadian indie rock supergroup, consisting of Mike O’Neill of The Inbreds, Chris Murphy of Sloan and Matt Murphy of The Super Friendz. The three friends started playing together as TUNS in 2015. Matt and Chris grew up in Halifax, Nova Scotia while Mike grew up in Oshawa, Ontario but moved to Nova Scotia in 1996. They were looking for a Halifax reference for their name, so they chose TUNS for the Technical University of Nova Scotia, which no longer exists. All three currently live in Toronto, Ontario. Unlike their other projects, all TUNS songs start out as jams made up on the spot. They have a new album “Duly Noted” which follows up their self-titled debut from 2016 and like that it features a drawing of the three friends done by Mike O’Neill. The record was recorded and mixed by Mike as well.

The album opens with `In The Middle Of The Way Home` and it`s a cracker. A sort of break up song that has some pounding drums, thumping bass and some superb guitar riffs that give it a sort of modern day Byrds texture. A quite eclectic guitar riff leads us into and through `We Stand United` with a shuffling repeated drum beat and steady bass line. A song of unity that has some

quite captivating guitar chords and some charming vocal harmonies.

`My Memories` is a song of somebody plagued by past reminiscences and enjoys a really fascinating almost Celtic rock guitar riff that put me in mind of Scottish band Big Country. We return to a more Byrd like retro sound with `Everybody Knows` which had a little hint of `So You Wanna Be a Rock `n` Roll Star` but relates a tale of finding something out where you seem to be the last one to know about it. There were some wonderful harmonies and intricate guitar riffs throughout.

`I’ll Only Love You More` had a dreamy Beatles ish feel until mid-way through where it took a real curve ball and gained a slightly harder edge and a much faster pace with the lyrics rapidly shared. A tale that tells the story of the trials and tribulations involved in the early blossoming of a romance. I thought that `In Another Life` had again a period feel about it. The song seemed to convey what we all feel at times that we`d be much braver or different in another moment or life. A marvellously compelling tune with a couple of short but intricate guitar breaks and sweet vocal harmonies.

`Words and Music` has a little more of an indie come belligerent touch about it but still retains that mesmerising harmonic effect and retains some wistfulness about it. We have a memorable appealing charm about `Double Down` a number narrating a risky gambling strategy which put me in mind of the type of classic pop classics The Monkees were famous for.

`Flags For Curtains` had the feel of a tom Petty number a real sort of roots rock number that recalls a friend who doesn`t seem to have moved on with their life and still leads an almost down at heel life. There was some wonderful drum bass and guitar interplay and delightful harmonies. We have a further mid paced offering with `Holding My Breath` which strode along with guitar riffs and lyrics that didn`t make a lot of sense to me.

`Keeping Options Open` had a shuffling drum beat sort of dictating the pace possibly telling an anecdote of looking for something better to come along but being prepared to settle for less. We end with the dreamy `We’re Living In It Now` which seems to relate to accepting what you have and just living for the moment.

There was an awful lot to enjoy with TUNS and `Duly Noted` their latest album. It has a sort of summer feel where dreams or ambitions can come true. The band seem like their having a good time which transfers to the listener. We have a dozen slices of upbeat indie pop rock which will leave you with that happy, optimistic, hopeful, cheerful all is well with the world vibe which in these troubled times is no bad thing.