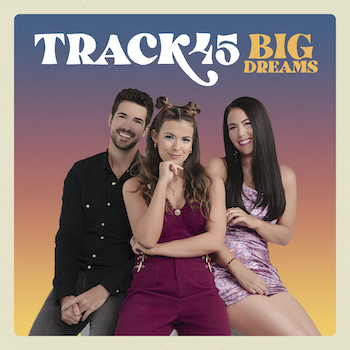 Me and my brother were in a band together for about 50 minutes once. I’ll explain.

One Saturday night we’d gone to see a band. They had two brothers in. We’d had a brilliant night and on the way home we formed a band. I was driving, My brother got on his phone and started looking for transit vans.

He lived with me at the time and when we got home, we split the group. Having no talent, no ability to write songs and no skill, we’d decided, was enough to call it a day (if I was the facetious sort, I would reel a load of outfits off that hadn’t been this self aware).

Far better, really, to leave it to those who can actually do it, to be fair.

Which, was a very long way round to get to the point that Track45 are the Johnson’s. KK, Jenna and Ben, to be precise, who in addition to looking pretty much like the most wholesome US stars you can imagine (the whitest teeth this side of Ross in Friends to be fair too) are formidable songwriters.

Now, here’s where it gets interesting. Amongst the artists they’ve written for are  Justin Timberlake, Charlie Puth, Lee Brice, Dierks Bentley, Weezer, HARDY, and Lauren Alaina.. Most of whom have been reviewed on here and the ones that haven’t are diverse.

There’s elements of all that on “Big Dreams” too. Catchy, pop, bits of rock and so damn nice your mum would have said to you as a kid: “why can’t you be more like the Johnson children….”

This five tracker builds on their “Small Town” EP from last year, and it starts with “Met Me Now”, and it starts as it means to go on. In that you can’t get the chorus out of your head and its deceptively clever. Solid gold hit, this and it isn’t the only one.

Best of all, probably is the blues influenced “Little Bit More”. A big rock song – this is an arena band in waiting,  they’ve been Facebook band of the day – it is, basically what Nickelback would think a country song was.

“Come On In” even manages to find a fresh take on the “southern thing”. This is the one that sells us the small town, home town dream, but it does it with class and originality. And the harmonies are class. Plus, “Sk8er Boi” ruled (and you’ll have to listen to get the reference!)

“Me + You” is a love song, but again, it does it in a way that at least isn’t the usual Hallmark Card verse, and the last one “Light Of A Clear Blue Morning” is proof that everyone likes Dolly Parton, whether they admit it or not.

“Big Dreams” is the sound of big plans being hatched. And I’d venture that it was impossible not to like it.