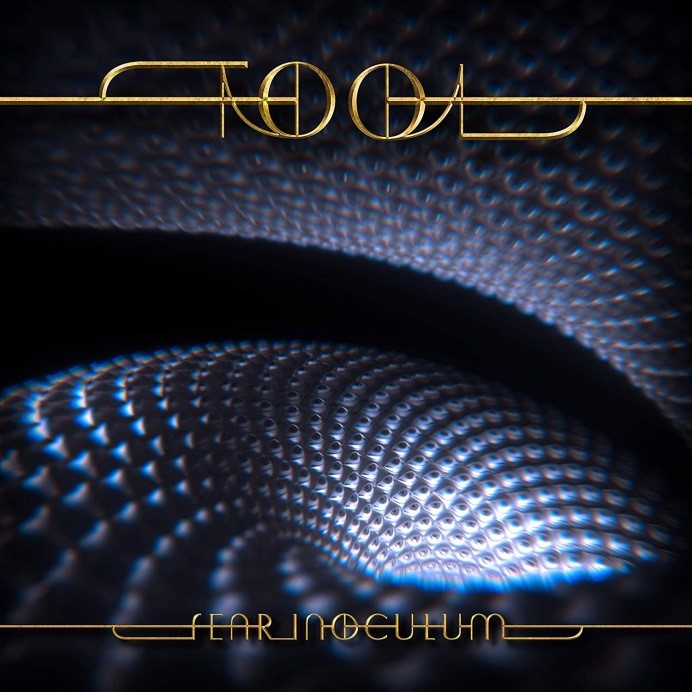 So thirteen years after the mighty 10,000 Days, Tool finally get around to releasing a new album. The build-up to this has kept the online gossip mongers occupied for years and they went into overdrive these past few months as the details started to be unveiled. Those at this year’s Download show were lucky enough to hear a couple of tracks and those songs, along with the set as a whole, appeared to have received a great response.

That reaction earlier in the summer highlights a true enigma – there really doesn’t seem to be any middle ground when it comes to Tool. Legions of fans believe they are of mythical status but plenty of comments show a good proportion of people can’t stand them at all. It’s love or hate with nothing in between.

I’m happy to confess that I’m in the former camp and I want this album to be great. So is it?

The album opens with the title track. A slow, brooding, world music influenced start gradually builds with layers of sound being added as the volume increases. Clocking in at just over 10 minutes long, it’s the perfect aperitif for the music that follows and it nicely links the sound of previous album to the new music.

The music that follows begins with Pneuma. This near 12 minute opus again starts off slow but it isn’t long before the fireworks start with a Justin Chancellor bass lead riff that is soon joined by the rest of the Band. Not dissimilar from the previous track, it builds layers of sounds before a false finish around the 7 minute mark leads to a guitar lead instrumental passage of increasing ferocity. It’s the first of many moments when the Tool fans will be giving it a ‘Hell Yeah’.

‘Litanie Contra La Peur’ is the first of the short instrumental songs. Not exactly essential Tool, these interludes serve as a moment of calm before the next storm and in this case the next storm is a hurricane – hurricane ‘Invincible’ to be precise.

‘Invincible’ is one of the new tracks played at Download and it’s sure to become a permanent part of the Tool repertoire as one of their greatest songs. It also happens to have one of the albums stand-out vocal performances as Maynard James Keenan comes out of his shell. The near 13 minute song builds in intensity as Adam Jones takes it by the scruff of the neck and into a riff at the 3.30 mark that will have listeners reaching for the volume control. Actually that’s another thing to add – this album gets better the louder it’s played as the listener gets deeper immersed without interference from the outside world. Drummer Danny Carey also stars as this track builds; he turns up the gas and pummels his instrument into submission. The guitar riff and drum fill just before the 6 minute mark is worth the price of admission alone and if there is an after-life, I don’t want to come back as his drum kit! The last 3 minutes of this track also need mentioning in dispatches – it’s about as ‘metal’ as this record gets and it is Tool at their best.

‘Legion Inoculant’ is the 2nd of the instrumental interludes and this one is pretty much white noise for most of its 3 minutes. On its own it seems inconsequential but as a breather between ‘Invincible’ and ‘Descending’ it does its job.

‘Descending’ is the 2nd of the Download tracks and after electronic sea-scape sounds to start, some typical Tool guitar picking introduces a great vocal performance. Another 13 minute track, it’s slow start belies what is to come as it builds at the halfway mark to a wall of noise with immense guitar work and more ‘Hell Yeahs’ in the closing stages. The song fades out with a repeat of the sound of the sea and this is all the respite the listener gets, as it leads straight into ‘Culling Voices’. At a mere 10 minutes and seemingly more restrained, ‘Culling Voices’ ultimately shows it’s teeth and holds its own against the sheer force of the other songs with some ferocious playing.

‘Chocolate Chip Trip’ follows and it’s 5 minutes of electronic sounds underpinning a percussive workout that has similarities to ‘Bonzo’s Montreux’ on Led Zeppelin’s ‘Coda’ album. Its good stuff but a little incongruous with the main songs and it ends up being no more than a longer interlude.

The last song proper is ‘7empest’ and it’s 15 plus minutes of Tool distilled in their purest form. It’s up there with ‘Invincible’ as the stand-outs amongst a high calibre offering and the sheer power and volume of the music raises the hairs on the back of the neck. It’s an almighty din but it’s still easy on the ear because it has all the ingredients the Tool fan wants. Barked vocals, rumbling bass, thunderous drumming and crunching guitar; it has the lot and is the fitting final movement in a symphony of excellence.

In fact it’s not quite the end, as the album closes with ‘Mockingbeat’ and its combined sound of electronic effects and bird song but in all honesty, by then the listener is too shell-shocked to notice.

So at the end the listener needs to draw breath and reflect on what they have just listened to. The short instrumental interludes pass by quickly enough but in my opinion they add little and the album would be none the worse without them; likewise ‘Chocolate Chip Trip’. However these are minor gripes and it just moves my focus to the proper songs on the album, all of which are immense.

The vocals are generally low-key in typical MMK style and this gives them the role of another instrument which moves in and out of the layers of music. The recording quality is superb and the mix of the bone crushing riffs, ringing solos, thundering drums, crashing cymbals and earthquake inducing bass combine in a multi-layered sonic bath that reveals more to the listener with every play. A special word here for guitarist Adam Jones – the riffs on this record are slabs of intense brutality and whilst this isn’t a heavy metal album, it is heavy rock in its purest sense. To my ears Tool are truly unique in what they do and how they go about putting together a rock album for modern times. I’ll go further and say the writing and playing demonstrates that true genius is at work. I’m convinced that in 200 years’ time this music will be revered in the same way we treat the classical greats and Tool will be held up as the shining beacon of the best music, of any genre, that our generation could produce.

It’s actually far better than that; it’s a work of art that transcends its rock origins and is, quite simply, outstanding.