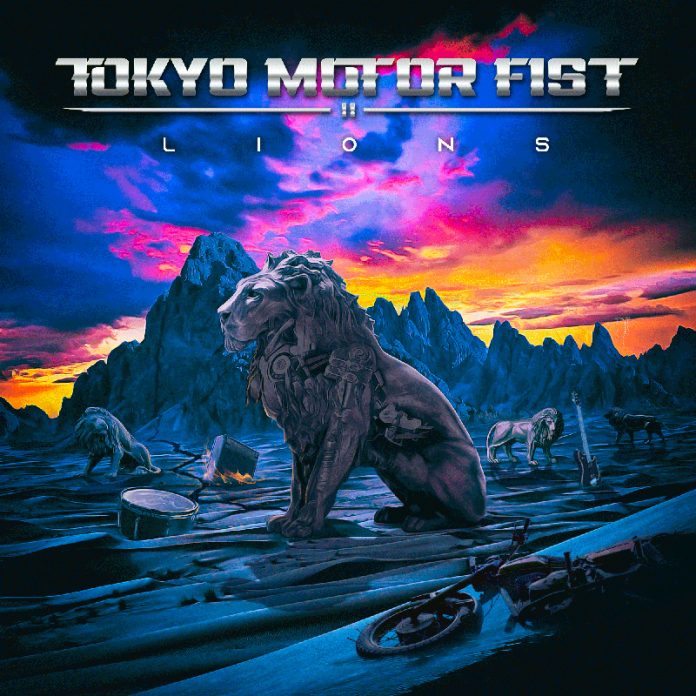 The joy of the import album. Today’s kids, the ones who think music is a Spotify playlist, they aren’t getting it, but to those of us lets say….of a certain age…… it’s still a phrase to make old men smile.

Tokyo Motor Fist might have a name that sounds like some Swedish punk band that opened for Backyard Babies once and had me proclaiming them to be the second coming of something, anything, before disappearing without trace, but they are resolutely in the early 90s import tape camp.

Their singer is Ted Poley, of Danger Danger fame, their guitarist is Steve Brown of Trixter. I paid well over the odds for cassettes of both about 30 years back in Tempest Records (the only place in Birmingham you could really get imports ordered in, and my goodness we did).

Poley’s boys used to have an intro tape that – if I recall correctly – said they were the band that “came in your mouth not in your hand” and Brown’s mob were one of many, many bands that were the “new Bon Jovi” and their first album in particular deserved the epithet.

The pair have a musical association going back years, and together with bassist Greg Smith (Ted Nugent, Rainbow, Alice Cooper) and drummer Chuck Burgi (Rainbow, Blue Oyster Cult, Joe Lynn Turner) they have made a record that is proudly rooted in the 80s.

They are very good at it too. Skilled musicians, and the most polished of polished sounds you can imagine, and nor is this some set up for a review that says “but TMF take some mighty turns into modern rock”, because it isn’t that record. What this is, right from “Youngblood” to the end, is what used to be called AOR and is now melodic hard rock.

Brown’s solo on the opener screams “rock radio” and “Monster In Me” sounds more like labelmates FM than FM do, almost.

This is the type of stuff that was on DD’s debut. Big choruses, massive stack harmonies and thunderous drums. Honestly, if this was any more 80s sounding I’d be back at middle school trying to get Dawn to dance with me at the school disco when “Sweet Child O’ Mine” came on.

Thing is, you can’t criticise that, because its exactly what it was supposed to be. There are the faster ones like “Around Midnight” has a real Tyketto type vibe, or “Mean It” which has the same fists up in the air thing that Def Leppard might (but then if I was the facetious type I’d say that Poley can still sing the high notes). Then there’s the slower ones like the title track. Kind of epic, kind of grandiose, the keyboard riff stops it being formulaic, but it was never to my tastes 30 years back and it certainly isn’t now.

The righteously sleazy “Decadence On 10th St” is more like it, it’s a proper glam stomper this, and there’s something close to modern day Europe about “Dream Your Heart Out”.

If we must have another ballad – these type of albums always had two back in the day – then “Look At Me” is sort of cool, I can imagine listening to this in 1993 when Helen didn’t want to go out with me pretending it was her loss (and one day I’ll learn not to use their real names….).

I hoped that it would end on a bit of a banger, and it does. Don’t be fooled by the strings here, “Winner Takes All” is something like “Slippery When Wet” era Jovi, but that’s where the 80s finishes, its not – unfortunately – a homage to Jimmy Tarbuck (a reference about three people in the world might get, but I am leaving it in).

Ultimately “Lions” is skilled musicians singing the sort of songs they probably were born to do. There’s not many chances being taken here and not much new ground being broken, but if you like 80s sounding hard rock that makes absolutely no apologies for being 80s sounding hard rock, then it it’ll probably make you roar.

Previous article
ARTIST OF THE DAY: THOMAS BARTLETT
Next article
TOO LATE FOR GUNS