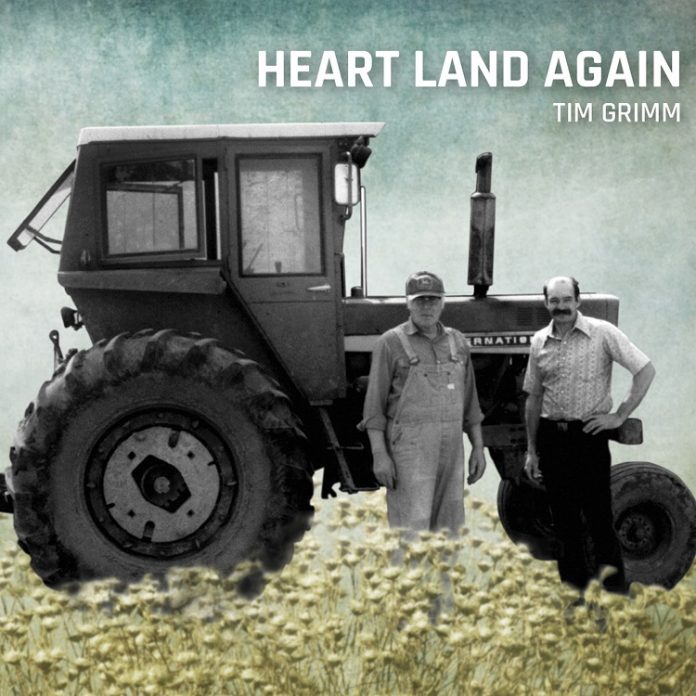 Tim Grimm is a rare talent. An actor and a singer, his album “Stranger In This Time” from a few years ago was stunning, dealing largely with the awful confusion of being alive in this horrible age.

For “Heart Land Again” he has done something a little more personal, it seems. It is shaped by, steeped in, and couldn’t exist without, Indiana.

From the opening “Staying In Love” – written about his father and his relationship with Grimm’s mother – and which is especially poignant considering that his dad a couple of years ago – to the closing “Pumpkin The Cat” it is content, gentle and superbly conceived.

There’s a line on “…Cat” that seems to sum this up better than anything. “There’s a cat on the porch, we call him Pumpkin, look at that moon, man, ain’t it something? I could stay out here for the rest of my days…..”

And it there is such a joy, a love on this album that you cannot fail to get swept up in it.

That one, actually, isn’t typical in that it is piano led. Most of them are real singer/songwriter stuff in the “classic” mould. Acoustic, steeped in the greats, but with an original slant.

“Too Hard Drivin’” for example, lets the listener into the commute from LA to Indiana which led to the move back, “Better Days” is an utterly glorious slice of reminiscence, the sort of storytelling stuff that Stephen Fearing does so well, and the beautiful, bittersweet poignancy of “She Remembers” will strike a chord with many.

“Carter’s Blues” is more outright folk than most. The harmonies here are superb, and recall the likes of Kelly Joe Phelps, and it’s striking too, the different paces, the subtleties of this record which really reveal themselves as you listen more and more.

“Down The Road” when you first hear it, doesn’t strike you as anything too special, but listen to the lyrics and the new highway becomes a metaphor for change, for “progress” and really, that is what the very best do. They reveal their treasures to you in different ways

“Sowin’ On The Mountain” has a beguiling bass line and totally different cracked delivery, not quite Malcolm Holcombe, but not far off, and the Double Bass of “80 Acres” gives that an old time feel, Sun Studios in Tupelo, something like that.

If “Love More” wouldn’t be a bad motto for 2019 to adopt, then there are still two songs above all others. Firstly “Perfect Getaway”, the true story of a trio of delinquents, is more than anything else, a fabulously conceived – and funny – thing, but the jewel here is “That Old Man.”

Sung by Grimm and his sons, it is a wonderful celebration of the relationship with a grandfather.

Now, I am writing this on a Saturday night when the football team I support because my grandad did has lost again, but I’d never swap those times with him, and I watch my own father with my baby niece now and to hear that set to music is wonderful.

But whichever one of these songs you connect with, you will do because “This Heart Land” is just a magnificent piece of songwriting, from start to finish.

Previous article
BAND OF THE DAY: PASSION
Next article
WOLFMOTHER CHASING IT