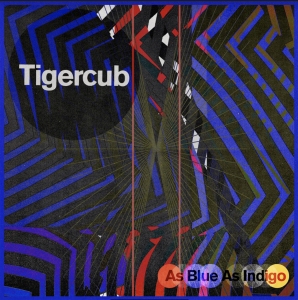 Brighton`s alternative noise trio Tigercub seemed to be on the cusp of something huge in 2017. They`d released their debut album “Abstract Figures In The Dark`, which had been well received and joined Pulled Apart By Horses on a thirteen day trek around the UK. They`d returned home and were looking forward to working on that difficult second album. In the meantime, singer, and guitarist Jamie Stephen Hall`s DIY experimental project Nancy massively took off and subsequently he was offered two record deals and played a string of dates around the world. Pressure builds in these situations and the initial Tigercub album that the singer had written was scrapped and rewritten from scratch which brought about a variety of issues with Jamie personally and the band.

The album kicks off with title track `As Blue As Indigo` which opens quietly and it seemed almost like a Jeff Buckley track, which leads you into a false sense of security before bang we get a shattering bass and guitar onslaught, and the number takes a sort of Muse like outing. It certainly wasn`t what I expected, but in fairness, nothing on this album is. The tension and noise level is retained on `Sleepwalker` which has the band really driving this piece together as the pounding drums seem to egg on the guitarists.

`Blue Mist In My Head` had a wonderfully edgy eclectic feel. The pounding drums and guitar chords allow a base for singer Jamie to relate a revealing chronicle of confusion brought on through aspects of mental illness. His softly shared vocals bring home this trauma more succinctly than any screamed diatribe, a real thoughtful submission that will maybe encourage some later reflection. A number that was written about people who seem to have the ability to sort of rub you up the wrong way follows with `Stop Beating On my heart (Like a Bass Drum) `.

It begins with almost a quiet reflection but really takes off at around the minute mark and has such a massive sound. there is a slight tension throughout that probably reflects what the singer has deemed as people who bring along that “cloud of toxicity and conflict”

`Funeral` the singer relates was written to cope with death, firstly directly to deal with his grandmothers passing, but also as an emotional outpouring to the shocking number of friends he has lost to suicide over the years. It’s a breathtakingly beautiful song with gentle vocals, acoustic guitar, and a string arrangement, emotionally heart breaking stuff. Another tribute follows with `Built to Fail` which is a sad love letter to a departed friend. Again, it starts quietly with vocals, piano keys, and a rolling drumbeat. But in the last quarter it ups the volume and intensity but retains that poignant hue.

`Shame` is quite soulful number overall but takes some scorching guitar riff diversions on route, a number that seems to convey issues of confidence and self-esteem. The lyrics are rapidly shared on `As Long As You`re Next to Me` a sort of throwaway piece that enjoys some quite melodic hooks.

Jamie shares that `Beauty` is an attempt to journal a mental tug of war he has with feelings of isolation. “I feel disconnected to everyone else, no matter how hard people try to empathise, it just feels like they will never understand”. Musically it’s another mammoth sound think Royal Blood or Queens Of The Stone Age. The album closes with `In The Autumn Of My Years` a quite introspective and reflective composition. A quite restrained offering that does feel that it`ll explode at times but manages to remain intact.

I have to admit that `As Blue As Indigo` was not the album I was expecting and what the singer has related sums it up as this record led him to explore his own personal issues, exploring topics including anxiety, depression, toxic masculinity, the death of his grandmother and the recent suicide of a close friend. It’s delightfully mature, open, and honest and i`m sure it must have been quite cathartic to make.  We have a real catholic mix of numbers from the almost ballad like to the more full on and in your face scorchers. A marvellous wide-ranging variety of pace and power. The band are on the road in the autumn and i`m sure tickets will be much sort after.