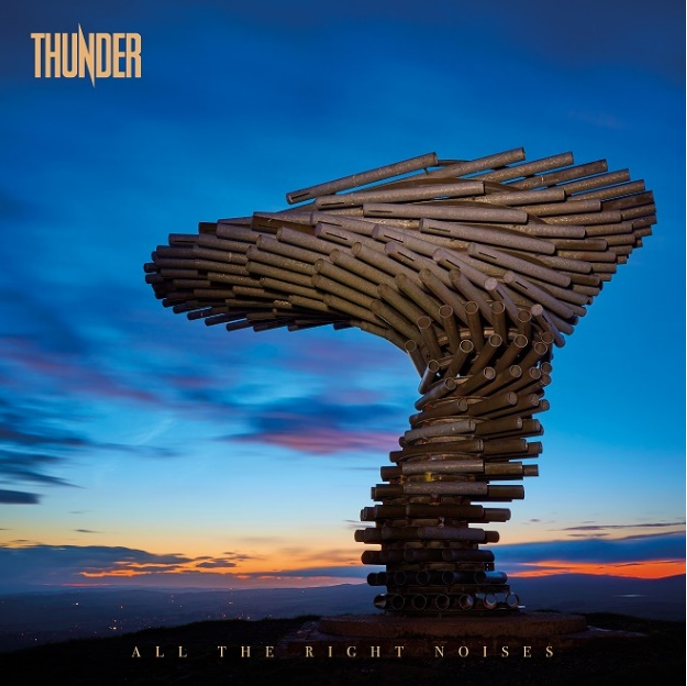 It happens precisely 16 seconds into “The Last One Out Turn Off The Lights” – the opening song on “All The Right Noises”. Luke Morley plays a riff and you think to yourself. “Christ, that’s “Whole Lotta Love”. And listening to it again and again, it does still bear a resemblance.

But let me tell you what else it signifies.

It’s an opening to a song that underlines – and this is not hyperbole – that Thunder are better than ever.

Now, that’s a big call, and I speak as a Thunder fan with well over 30 years invested. Like, I bought the debut record the day it came out type history. I’ve been to at least two farewell shows (I’ve even got the live CD from one of them, they were the first band to record bootlegs and sell them as you were leaving), I hate Christmas, but I’ve seen three of the festive shows and ….well look, you get the point.

Seriously, though and this is said after due consideration, what we are dealing with in “….Noises” is the finest collection of their careers.

Not least because this is the first time, really, that Thunder have truly been this brave. The first time they’ve seethed so consistently. They’ve always had a more political stand point than they were given credit for. Way back when, for every “Dirty Love” there was an “Englishman on Holiday” – for every “Don’t Wait Up” there was a “Welcome To The Party”. Here, though, there’s a dismantling of the world around them.

“….Lights” might sound jaunty, and might be filled with a horn section circa Aerosmith “Permanent Vacation”, but it tackles Brexit, leaving neither the left nor the right unscathed.

Then there’s “Destruction”, where they’ve never sounded heavier. It’s still very much Thunder, and it has the same feel they’ve always had, but have they ever written one that thumps like this? I am not sure.

And, speaking of “not sure”. The acoustic, country fried licks of “Smoking Gun”. I’ve listened to the song many times in the last few days and I am not certain, even now, whether the “unhinged” lead character is Trump, Johnson or Farage. It kind of doesn’t matter, either, as it suits whoever you want to make it suit.

“Going To Sin City” – I’d assumed when scanning the tracklist – was going to be “good time” Thunder, “the Devil made Me Do It” nudge, nudge wink, wink stuff. They are ace at it, and it is, sort of. Let’s say, it’s done with a twist, this time.

There are two things that never get said enough about this band, in my opinion. One is just how talented Luke Morley is, and how good his guitar is. And second, never mind Danny Bowes’ voice, he is arguably – along with Magnum’s Bob Catley – the greatest interpreter of someone else’s words. Both are underlined by “Don’t Forget To Live Before You Die” opining the vicarious existence of 2021.

Not for nothing did this band have a compilation of ballads once. “I’ll Be The One” does the tear-jerking thing. Personal taste aside, there’s a market for this and they know it. And they know how to do it.

“Young Man” – lets be fair, there’s a hint of “Children Of The Revolution” here – poses the question of the pressures on the young. Fair point, and it makes for an interesting song. “You’re Gonna Be My Girl” is too. Lyrically, it is what you’d expect from Morley, but musically, they’ve never sounded as Stones like as this. The rock n roll is pure and fun.

“St George’s Day” is as far removed from that as can be, but I’d argue that it is one of the finest songs they’ve ever made. Their Billy Bragg moment, if you will. Written from the viewpoint of a refugee seeking asylum on these shores. It is brilliantly and eloquently done.

There’s another bluesy, acoustic one. And I am saying that “Force Of Nature” is about Trump for certain this time. Written before Covid, it is striking how much of this still fits in a post-pandemic world, and if there’s a bit of early 70s rock about “She’s A Millionairess” ,, the words continue a usual theme of the abuse of privilege and power by the “in crowd” of West London, but the backing vocals and the general feel of the track is both funky and fun.

On the aforementioned “Young Man” is a line that resonates more and more. “Even music’s lost its soul” opines Bowes. It’s as if with “All The Right Noises”, Thunder were determined to prove they still had it in abundance.

I was going to say “to release a record this good at this stage of their careers is astonishing” and whilst it Is, it also feels like damning it with feint praise. The fact is that this album is essential, simple as that.