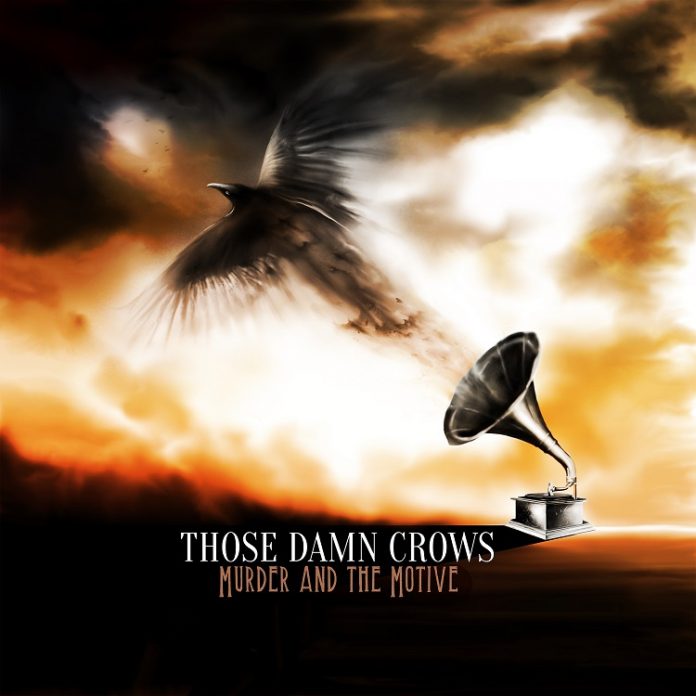 An interesting one this, because this isn’t a new record at all. In fact, the review underneath this preamble was first published here, just over two years ago, but a lot has happened to Those Damn Crows since.

And somewhere along the way, they became a very hot name to drop indeed. And got a record deal at Earache Records, the home of The Temperance Movement and Massive Wagons amongst others.

What time hasn’t done is diminish the quality of “The Murder And The Motive.” It is choc-full of great songs. “Someone Someday”, the anthemic “Rock N Roll Ain’t Dead” and the wonderful, stomping “Behind These Walls” would be chief amongst them and then, even as I type this, “Say It” comes on and you think, “christ this is the best.”

So, look, I am printing this review verbatim, warts and all, as it was (even the bit where I praise Alter Bridge, who I actually can’t stand). This new version is shorter – only having 10 songs on as opposed to 13 – and has a different tracklisting, but its brilliant.

The band are already working on new material, so this is just the end of the begininig and the start of the journey. And, as this proves, MV was there at the start.

Who says that rock n roll is dead?

It’s odd, that even now, every now and again some clown who should know better (and yes Gene Simmons I am talking about you) turns up somewhere and proudly announces that rock n roll is dead. Dying. We’ve killed it.

The problem with this level of bullshit, is that for a while people start to believe it. The magazines are full of whatever nonsense genre they’ve invented with “core” at the end or “post” at the front (which is still better than Babymetal let’s be honest about it) and that’s how it goes for a while.

Meanwhile, people get on with making great rock n roll without a care in the world – and here’s the kicker “taste makers” – the people don’t listen to what you tell them too, the people love it. Which is precisely why Alter Bridge and Nickelback are merrily on area tours this autumn and Black Stone Cherry routinely fill them whenever they choose.

And more to the point its why Those Damn Crows have made such a brilliant record.

Deep down in the valleys of south wales, the five piece have put together a 13 song debut that takes the idea that rock is on its last legs and makes a mockery of it in less than 50 minutes. Not least of which is “Rock n Roll Ain’t Dead” which essentially says what the opening 200 words of this review said, just more eloquently and with a better chorus.

Indeed, riffs, choruses and attitude are what “The Murder And The Motive” lives on. There is nothing about this that remotely ashamed or apologetic, instead the “Don’t Give A Damn” strides in with its dick swinging on the back of something huge, “7 Days” chugs like it has somewhere to go. Urgently. And “Someone Someday” makes its defiance clear.

TDC – you suspect anyway – couldn’t have made any other record than this. And even if they could they wouldn’t have wanted to. “….Motive” is honest and true to their own tastes, and “The Fighter” would cheerfully fight any man to prove it, “Blink Of An Eye” shows a more gentle side – in places its not unlike fellow countrymen The Sterephonics might have had a crack at in their mid-period, but its work like “I’ll Be Coming Home” that you imagine is the stuff that the band and their audience will enjoy the most, racing out of the blocks and looking for trouble, is exactly the type of rabble rouser that great rock n roll always was.

Admirably, although not many modern records are 13 songs long, there’s not a let up in quality here. “Breakaway” is tucked away in the middle like it’s not important, when in fact its glorious sheen makes it a real highlight and  “One Of Those Nights” possesses a darker, more brooding riff. “Red Light on the other hand” is the soundtrack to your next three points on your driving license and the last song here, “Tonight Tonight” stomps and struts just one last time, because it can.

Contrary to what “the media” think, not everything has to change the world and be groundbreaking. Sometimes ace songs are enough and “The Murder And The Motive” has ‘em by the bucketful. Midlands hard rock mob Stone Broken showed on their debut earlier in the year just because you are playing the Dog And Duck, that doesn’t mean you can’t dream of playing Wembley, and like them, Those Damn Crows are arena rock in waiting.

Oh, and rock is not even poorly, it’s in rude health.