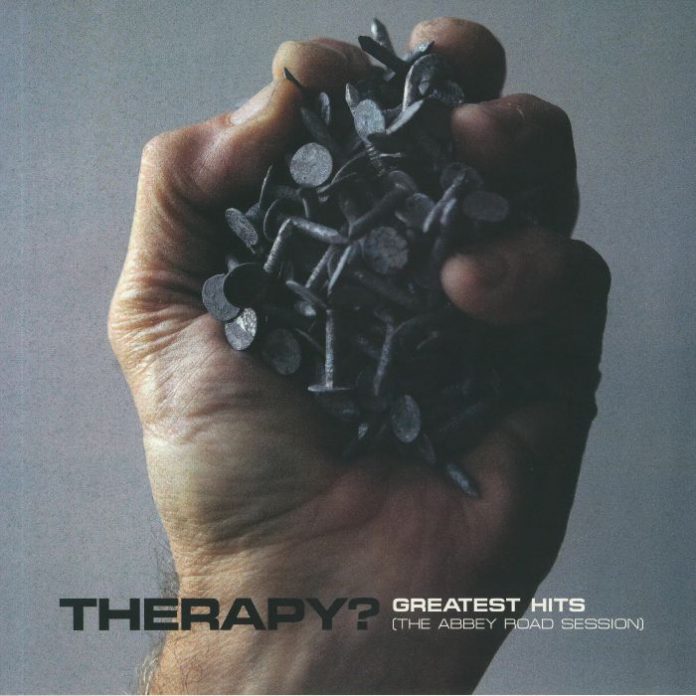 I hope it isn’t just me and someone reading this will recognise themselves in this too.

But it’s weird how, sometimes, you hear a band and first of all you remember how much they meant/mean to you, and second, you think: “why don’t I listen to them every damn day?”

Those early albums, man….they spoke to me in my teenage years. Before social distancing was a thing, they were the soundtrack for the socially distanced.

They were the band who wrote lyrics where you went “he didn’t just say that did he?” The thing is, Andy Cairns usually did. Like the start of “Trigger Inside”, who else writes: “Here comes a girl with perfect teeth/I bet she won’t be smiling at me/I know how Jeffry Dahmer feels”?

That’s why you either get Therapy? or you don’t. I am not sure there’s anyone who thinks the band are “alright”.

Which is why this “Greatest Hits” works so well. 12 of their “hits” fair enough (which means no “Potato Junkie”, which means I don’t have to walk about informing everyone that James Joyce is sorting out my female sibling – I don’t have a sister, so it’s probably for the best), but 12 re-recorded versions of the tunes, made at Abbey Road with Chris Sheldon who helmed most of their best stuff and worked on the fabulous return to form that was “Cleave” a couple of years ago.

And these aren’t versions where you wondered why they bothered. Instead, this sounds like Therapy? recording them in 2020.

Done in chronological order, there is nothing from before ‘92, “Teethgrinder” kicks things off, and Neil Cooper’s drums here have a slightly different sound to those of Fyfe Ewing on the original (Cooper has been their drummer for 18 years now) and then “Screamager”. This was the one. The one that sent a certain type of kid mental back in the day. Yes Helen Barlow (names not changed) you might have turned me down in 1994, but I had my rejection anthem: “screw that, forget about that” before admitting “I have nothing to do, but hang around and get screwed up on you….” Oddly seeing as I am now writing this in the Coronavirus age, I really to have nothing do get on with….

Then “Opal Mantra”. A non album thing. But, yep. “I never really cared about you, I never really got to thinking about you,” always seemed like an ace put down. And I’ll say right now, that along with Ricky Warwick, I don’t think there’s ever been a better writer of sloganeering lyrics than Cairns.

“Turn” – which like “…Mantra” was on early EP, is given a sweet and subtle makeover, before a clutch of hits. I am not a clubber, never was, but I don’t want to live in a world where “Nowhere” wouldn’t fill a dancefloor or where “Die Laughing” doesn’t cause me to scream “I think I’ve gone insane” at the top of my lungs (here it is a duet with the Manics’ James Dean Bradfield, and works marvellously).

Now, I’ve read reviews that have concluded that their 1995 album “Infernal Love” was “self-indulgent”. I disagree, but either way it does have my favourite song by the band on, and “Loose” sounds superb in this form. The biggest change, though, is reserved for “Diane” – another “….Love” classic. The Husker Du cover was a haunting violin based thing on the original Therapy? version, but here it sounds like you sort of want a Therapy song to sound.

“Church Of Noise” is welcome too. The “Semi-Detached” album was always underrated in my book, and that and “Lonely Cryin’ Only” both prove their class here – and that’s it, there is nothing from the 2000s here, hopefully they’ll do something like this with that output though, because whilst it might have been past their commercial peak, there was some nasty, gnarly, bleak shit going on with those releases, and some of them were fabulous.

So is this essential? Probably not, and if you wanted to introduce someone new to the sheer genius of the band, then you’d probably start with “Troublegum” from 1994 and not here, but whatever, for a long time fan this new vision, as it were, is fabulous and 12 songs that prove whilst “Happy people have no stories” bleak, twisted black humour makes for incredible music.