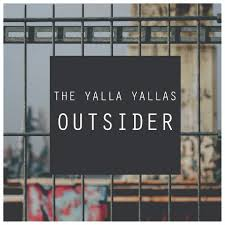 ‘Outsider’ is The Yalla Yallas fourth album and includes the singles ‘Problems’ and ‘Somewhere Anywhere’, as well as the new release ‘Run’. ‘Outsider’ was written by front man Rob Galloway in a number of European cities throughout the first half of 2018 and the band recently debuted the new songs at the famous Brudenell Social Club in Leeds which I was lucky enough to attend and review.

Opening track is a rock influenced tune but I know the frontman was originally influenced by bands such as Guns and Roses so this is no surprise, the solos have that classic rock feel and the harmonic middle vocal section, bass and thundering end are in an 80s rock style.

However, ‘Outsider’ sees The Yalla Yallas at their most adventurous, stepping out of the punk bracket to embrace a wide range of genres like rock n roll, gospel, country, and blues.

‘Borrowed Heart’ reminds me a lot of the Replacements and Husker Du with the derivative strumming guitar and bouncing bass and the guitar solo, harmonies and sax’ take the end to another level. ‘Another Day in Hell’ has a similar feel but with much more jangly guitar that Tom Petty would have been proud of.

They know how to write that 3 minute catchy tune. Single ‘Problems’ has excellent lyrics and a driving rhythm with a melodic solo that may make you want to get out your air guitar. This song shows that sometimes the best songs are those with the simplest format.

‘I Got Nothing’ is played in a country style and whilst their influences may be heavy someone has been listening to some Dylan. ‘Devil’ is in a similar vein with a driving rhythm similar to early Dylan stuff and there are also elements of the Waterboys in here. ‘Blackpool’ a song about their exploits at Rebellion Festival and has some amazing harmonies that make the song glide.

I know that Rob was originally influenced by 1980s rock and ‘Walking in The Rain’ is rock ballad, the band are excellent and Galloway can really sing. In total contrast ‘Murder Baby’ is a real rockabilly type song and so cool with its heavy drum break, sax and the jazzy middle section, a really interesting departure that fits brilliantly as they storm to the end.

‘Somewhere Anywhere’ could be the Men They Couldn’t Hang. The bopping bass line is very difficult not to move to and the guitars complement it brilliantly with the drums holding it tight. The lyrics show Rob’s passion for live and getting things done which has long been his mantra. Great ending solo guys.

Closing track ‘Into the Future’ has a class bass line and a great rocking chorus that live will have them all singing along. This is a simple rock chord progression that reminds you of so many songs but they are no copyists and with their musicianship don’t need to be. The piano, sax and harmony outro is Springsteen-esque and a real rant at society – ‘Look at the Fuckin state we’re in’ – Indeed

ANOTHER DAY IN HELL

WALKING IN THE RAIN