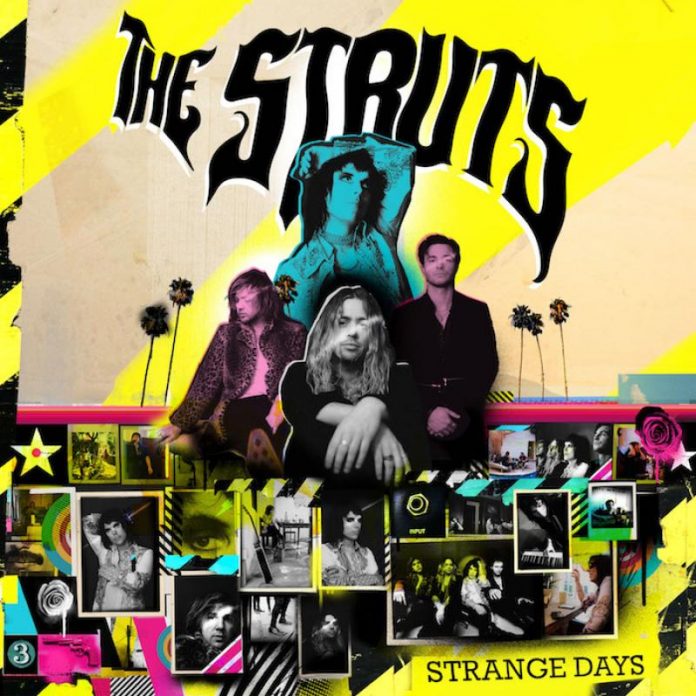 I have many musical opinions that I will not be shaken on. Not one jot. These include but are not limited to: The Beatles are a boy band. Muse are shit, ditto Shinedown, ditto Alter Bridge. At the same time I love The Darkness and I genuinely believe that The Struts are the saviours of rock n roll.

I’ve thought this for years, I’ve thought it every time I’ve heard them or watched them live. They are the physical and literal embodiment of excess, pomp, grandiosity. Frontman Luke Spiller, it seems to me, is the type of fella who would go to Tesco in a sheepskin coat and dark glasses and writes “rock star, darling” on any form that requires his occupation. Why? Well because he is. It’s his natural state. He believes rock stars should be larger than life, should be what you aren’t.

Now, the fact is that all that would be frankly, a touch ridiculous, if The Struts weren’t so, so good. And lets get it said, The Struts are ace, and “Strange Days” is probably their best record to date.

It’s also got a cast list that has more A-listers than the Oscars. The opener, the balladic, string washed 70s title track. Robbie Williams is on that one, because…well, he is. The lyrics are kind of thoughtful too, a snapshot, if you will of 2020.

It’s not bad (not quite good enough to forgive Robbie for supporting the football team he does, though) but for my money, what you want from The Struts is “All Dressed Up (With Nowhere To Go)” a song that literally makes you feel better. A song that says, “yes we know you ain’t been out in months, but there’s a better day”.

Another one of my unshakable musical beliefs is that I used to love Kiss, then went off them. Listen to Spiller at the end of “Do You Love Me?” here though. “luv?” he asks, “do you love me?” Like it’s the most natural thing in the world – which to him it probably is.

“I Hate How Much I Want You” is so good and so unashamedly glam rock that you can (nearly) get past the truly terrible acting between Spiller and Joe “King Of The Leppard’s” (his words) Elliott. The song itself is a belter and both Elliott and Phil Collen are fabulous on it.

The first time I heard “Wild Child”, I genuinely thought, “crikey that’s heavy, it sounds a bit like Cochise” Yep, that would be because Tom Morello is on the thing, then. But the true skill of the album is even without the special guests, the songs are superb. “Cool” is about as Stones like as it gets, and the line “I should have gone home but I couldn’t help myself,” surely is from experience, right?

“Burn It Down” is for that moment in a Struts gig where the singer sits at his piano and goes full on Elton John. It is a proper bluesy thing, though, and The Faces at least would be proud, and “open up your front door, bonjour” is one of the great lines.

The last of the special guests is Albert Hamond Jr. Who they apparently called up. You have to admire that level of chutzpah, to be fair. Anyway, The Strokes man is all over what amounts to an indie banger, “Another Hit Of Showmanship” comes on like The Killers and it is balanced beautifully by “Can’t Sleep” which seems, to me, to take “Can’t Hurry Love” as its starting point, and then make the chorus shake Wembley Stadium.

The last one is even a foray into soul. “Am I Talking To The Champagne (Or Talking To You)?” Is essentially as absurd as its title, but then this whole record is basically in that category.

Some will love it, some will hate it, and whichever it is The Struts will not give a monkey’s. This is them, this is who they are, and “Strange Days” is not just their statement, it is their gift to the world in its time of need.

Previous article
BAND OF THE DAY: BULL
Next article
BEHOLD THE TUNGSTEN OCEANS