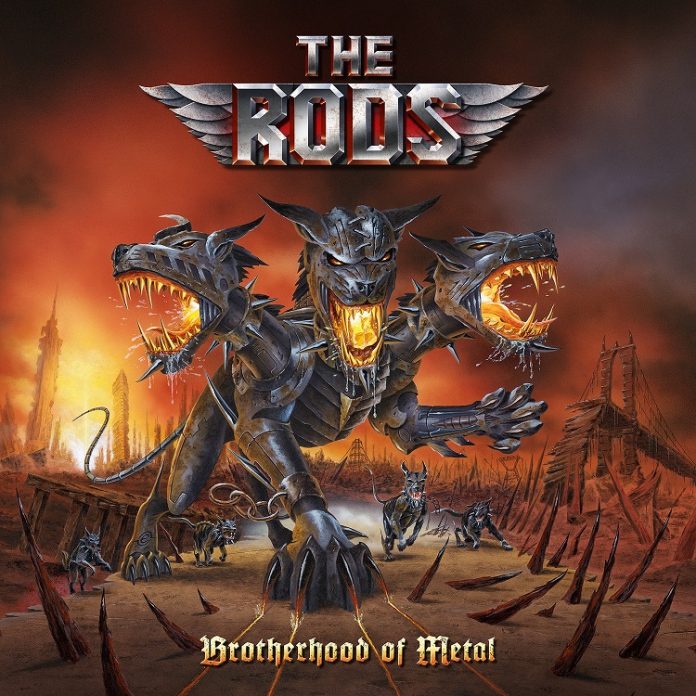 You know that bit at the start of every Motorhead gig? That bit where Lemmy came out and said: “we’re Motorhead and we play rock n roll”?

Well, The Rods equivalent would be simply this: “We’re The Rods” and we play heavy metal.

The Rods had some success back in the early 1980s, largely – and we might as well be honest about this – because their singer David “Rock” Feinstein was in Elf with his cousin, a certain Ronnie James Dio, then they disappeared around the time “Slippery When Wet” came out.

They resurfaced in 2011, with the same line up, and “Brotherhood Of Metal” is their first record since.

The problem (that is, if you think this is a problem?) is that “Brotherhood Of Metal” basically gives all its secrets away in its title track. “An army of denim and leather” sings Feinstein and that’s just fine. It – or something very similar – has been done about a million times, by all kinds of bands, from the tedious, like Manowar, to the ace, like Saxon.

But then, The Rods know this. Do they care? Not a jot. That’s why they follow it up with the Rainbow-meets Deep Purple mash up of Everybody’s Rockin’ (and you kinda guessed the “g” was superfluous here).

It’s as simple as this really. On the opening line to “Smoke On The Horizon” they sing: “When you see smoke, there’s always fire”. And as a follow up to that drummer Carl Canedy – who like Feinstein has had his balls to this particular wall since the start – says  “If you like the first song, then the odds are you’ll like the whole album. It’s balls-to-the-wall heavy metal, song after song. No ballads and nothing your mom will be humming.”

Your mom might like metal, who knows? But to paraphrase. If you still see denim and leather and think it brought us all together, this is the band for you.

“Louder Than Loud” has a kind of Anvil thing going on, “Tyrant King” has a riff that is recycled from British Steel era Priest, and if “Party All Night” manages to sound exactly like you think it will, then the bass groove from Garry Bordonaro is enormous, the sort of thing not heard since Faith No More and the whole thing is filthy.

Other than that there are no surprises here, not really. “Tonight We Ride” sounds like a power metal band from Germany or somewhere playing a Motley Crue song, “Hell On Earth” does the Sabbath thing you thought one of them might, and “The Devil Made Me Do It” has a bit of mighty organ, and a fists in the air thing going on.

Don’t think for one minute that “Brotherhood Of Metal” is a bad record. It isn’t. Not at all. It just has very few surprises, and not a great deal of originality. “Evil In Me” is a suitably epic conclusion, but there’s one a couple of cuts earlier that explains all of this.

When they formed, The Rods played with all the greats, Maiden, Ozzy, you name it, they did it. They immortalise their own history on “1982” which lays all this out in black and white. On the chorus Feinstein sings: “The Rods were born in 1982”, and I am willing to bet you they wish it still was.