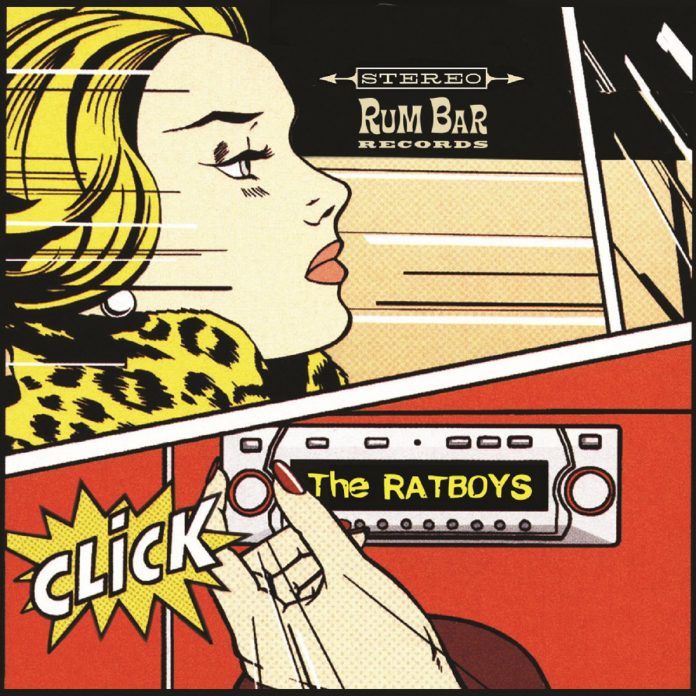 You know when someone is wearing a Ramones T-shirt and you can bet your life some tedious arsehole goes: “I bet they don’t know every song on the [insert title here] album?” That’s got to stop.

It’s nonsense, and is nothing but snobbery.

Here’s a fact. I first heard The Ramones when Skid Row covered “Psychotherapy”  and I own one Ramones record. A Triple best of. And its ace.

I don’t own a Ramones t-shirt, but I do own a Wildhearts t-shirt with a mock-up of the classic Ramones logo.

Why? Well, I am guessing, simply because “Everybody Loves The Ramones”. That’s the title of the first song on “Click” and essentially informs the rest of the record.

Because if you love The Ramones, or the New York Dolls, or pretty much any band that ever sounded like them. Ever. Then get on The Ratboys.

They are bursting out of Northern Europe with no thought of being anything other than what they are.

And this is glorious.

The second song even manages to transport itself to America – and believe me, that is where the hearts of Eric St John: Vocals, guitars and keys, Vincenzo D’Aguanno: Bass, James Neligan: Guitars and Reno Aerts: Drums belong. “Swimming With The Sharks” starts with the lyric: “from New York to LA” and promptly boils punky trash n roll down to the brass tacks, and harmonies? Yes please, they are sugary sweet.

“Sonic Boy” bursts in with the type of lead guitar that suggests James is playing it with his strap down below his knees, like anyone cool ever did, and “Listen Closely To Your Heart” is the kind of power pop that you literally cannot dislike, unless you are a monster.

“Summer School Girl” might well be a Ramones cover (couldn’t care less if it is, I haven’t looked it up) so like Joey and the chaps does it sound. But there’s an innocence to the love affair that is just lovely. “Stand Up And Fight” takes things down a dark alley, but on the back of a bubblegum pop tune, and “French Girls” is an ode to the sophisticated, but it has a totally un-self-conscious air. “Oooh laa laa” it goes – of course it does – and why not?!

Reno’s drums anchor down “Come On Baby Turn Me On” and there’s just a touch of Georgia Satellites here, the lead had me humming “Battleship Chains” that’s for sure, and “Motor City Rock n Roll” is essentially the whole album in two and a half minutes.

There’s some brilliantly odd organ sounds (I assume, I am not a musician) at the start of “Leave Me No Choice” that takes that back to the 60s, and “Click” you simply have to say, is one of the more lovingly put together records around.

The Ratboys, started in 2009 when Eric took his daughter to a festival in Belgium. There he met Vincenzo, who he hadn’t seen in years, and they formed the band. In 2017 they tried again and got the two new guys in, which led to this collection. That’s the sort of thing that – normally – you put at the start of a review, but here, it feels like the end.

Because to me, all it shows is that everybody involved in The Ratboys is merely doing this because they love it, that if they weren’t in the band they’d be watching a band just like them.

That sheer joy comes through loud and clear.

Excellent work it is too.