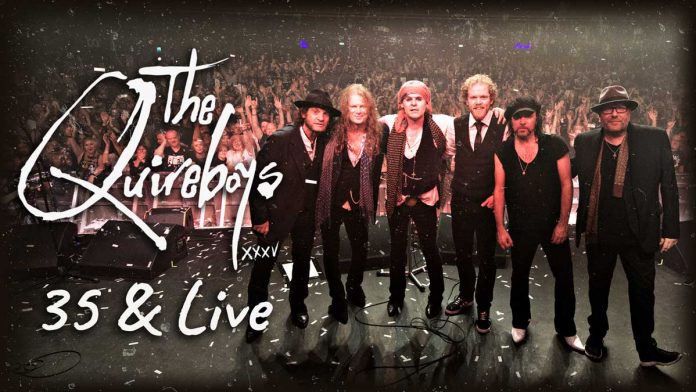 The Quireboys, as I sort of say every time I review them, are one of the seminal bands for me. I guess you had to be a kid growing up in 1990 to empathise with this but it went like this.

MV’s Donnie and me, gi back a long, long way. We went to school together and used to collect Kerrang! Religiously. They used to do this thing called the Sexi Flexi, a cover mounted piece of plastic which opened us up to new sounds – it was like Spotify but cooler.

One week, one of these was on The Quireboys. We’d never heard anything like them. We loved them (me moreso because two of them sponsored the kit of my fave footballer at the time, Wayne Biggins, look him up….).

29 years later, they remain one of my top 10 bands of all time, and it was with a genuine pleasure that I can review “35 And Live” and talk about the music and what it meant to me over the years.

It could be the countless times I’ve seen them live, it could be the time I saw their singer Spike in the crowd at a Bad Company gig in Birmingham – he had paid in like the rest of us, except he was dressed as “Spike” not Jon Gray. Not because he’s a caricature, but because he is totally natural. A bloke said to him as we left: “Hey Spike, what you doing here?” The reply: “watching Bad Company, same as you….” Was utterly glorious, because he is one of us. He always will be. If he wasn’t in the band, he’d be watching a band just like this. Only not as good, obviously.

Forget the line up changes over the years – crikey I think I might be the only person who hasn’t played drums for them – they haven’t really changed much, and because of that, I would argue that they’ve never made a bad record.

So it was that they headed off to London and the Kentish Town Forum (a place where, under a different name they recorded their first live video years and years ago. I’ve still got it too, I just haven’t got a video player) on September 14th 2019 to celebrate their legacy – and crucially their present too.

The stuff of the debut, “A Bit Of What You Fancy” proves beyond any reasonable, remaining doubt that the record is one of the GOAT, right from the time “Hey You” starts it, then “Man On The Loose”, “Long Time Coming” and “7 O’Clock” (although if The Quireboys have a party, I am willing to bet that it doesn’t start at 7pm) and the glorious “I Don’t Love You Anymore” underline it. It is and always was, a copper bottomed gem. A jewel.

But it’s the rest. There’s a moment towards the end where Spike yells “This Is Rock N Roll” to herald the track of the same name, where you think back to 2001. It had been their first album in eight long years. I listened to that song when the CD came mail order, and within 30 seconds, I am texting Don going “they’re back matey.”

And the albums they’ve put out since are basically all brilliant. “Original Black Eyed Son” from “Amazing Disgrace”, this years effort, is right from the top draw as is “Seven Deadly Sins” and, arguably the best from the 2000s stuff “Mona Lisa Smiled”.

The encore of “Sex Party” – yes its ludicrous, but I will stay maintain there is an innocence about this too – is fun, but they go right back to the start to finish, as it were.

“Mayfair”. It wasn’t even on the debut album – and I was immensely excited when the aforementioned Don text me one day to say “I’ve bought you something from a record fair, pal…..” had a fella called Ginger on the original (whatever happened to him….?) but showed beyond all doubt The Quireboys always had something. The way they play it here proves they still do.

The conclusion of this review…..blimey, I don’t know. So let me just say this, however trite it might sound, because I don’t know if bands ever truly get it: so for the last almost 30 years, to Spike and the rest of The Quireboys, throughout the decades, I sincerely thank you, because my life would be poorer if it hadn’t included your music.

Rating. Nah, they don’t deserve rating by me, not for this set.