REVIEW: THE POPPY JASPER BAND – FROM THE DELTA TO THE COUNTY LINE (2020) 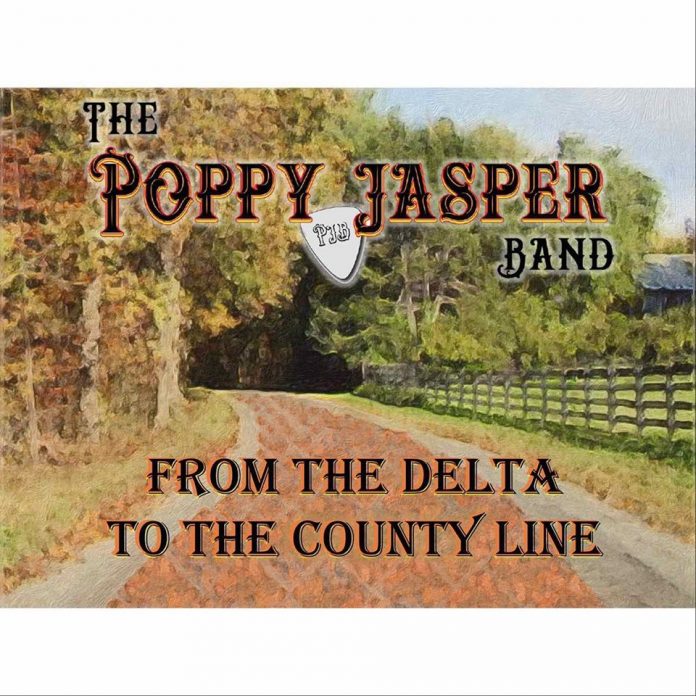 OK, hands up at the back. Who did about two quizzes at the start of lockdown and immediately realised why they hated quizzes?

Surely, not just me.

Who among us took one look at the name on the top of this EP and thought “Poppy Jasper that will be folk singer, long flowing skirts and pretty, ephemeral tunes?”

That ain’t just me, either, surely?

If you know Poppy Jasper is a semi-precious stone that is only found in Morgan Hill, California, a small, rural town at the southern edge of Silicon Valley, then hats off to you, my friends. Either that or you’ve read the same band bio I have.

What I am absolutely certain about, though, is two things. First, you’ll know what the band sounds like from this chorus: “You hear the Gibson guitars and the Beale Street bars, and I always come back to you”.

And second. The five men that make up the Poppy Jasper band are very, very good at what they do.

They named the band what they did so they could always keep a little slice of home with them, but their musical heart is down south, in that “Mississippi Delta” that they named the first song – from where that line came – after. This is the America that we in the UK think the whole of the Darn Tootin’ south is, frankly. And that is just fine.

“Wanted Man” has the big groove thing of bands like James Gang going on, or to give it a more modern reference, then think Jared James Nichols guitar sound I suppose. Paul Dawson’s organ makes this one too. While Stephen Beard has the type of voice that you need for this, as harsh as Texas Hippie Coalition, but somehow soulful too.

Lead guitar man John Ladas takes the vocals on the more soulful “Time Heals All Wounds”, which has a touch of the Kenny Wayne Shepherd band about it, while “County Line” is more acoustic, laid back and as summer harmony drenched as The Eagles. Perfect for taking it easy, you might say. “Wrote you this here love song, my love for you is true”, it goes. You half think he might be singing about the location rather than a woman, so ingrained is the music here.

Clearly for Poppy Jasper Band, this music is as precious is the stone they are named after. Only 20 minutes, but as the solo hits in the last one, you are transported to that special place that only this type of music can do.

“From The Delta To The County Line”, let the words ring loud. This is fabulous. And yes there are loads of bands doing it, but who cares? It doesn’t make this any less superb.