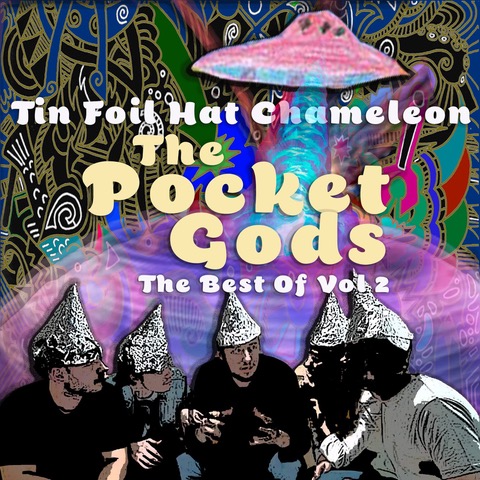 The Pocket Gods are a cult British indie pop band from St Albans founded in the late nineties by lead songwriter Mark Christopher Lee (sometimes known as M.C. Lee). They were discovered by the late John Peel and recently championed by the likes of Tom Robinson from BBC 6 Music.

They have recently released their second volume of their best-of with `Tin Foil Hat Chameleon The Best-Of Vol.2`, which alongside the instrumentation of Noel Storey and frontman Mark Christopher Lee, also features long term drummer Scott Ottaway most famous for his work with 60’s legends The Searchers.

This release kicks off with a fan favourite `Perfect Blue` a delightfully captivating number that arrives just in time for Summer. Think of all those songs that stick in you head and have you humming for days like The Only Ones `Another Girl Another Planet` and this will be the same. There`s a new number with `The Ballad Of Dave Insepso and Kimmy Loadletter` which is inspired by rom-com My Best Friend’s Wedding and Mike Judge’s cult classic Office Space. As it says on the tin it`s a kind of out their ballad where Julia Roberts and Cameron Diaz get name checked along route. A sort of psychedelic trip with shook tambourines thrown in for good measure, what more could you ask for??

How can you describe `Superman`s Head`? Think Jilted John`s `Gordon Is A Moron` on speed with The Shangri-La`s on backing vocals and add a buzz guitar and you`re getting close. A wonderfully enchanting and eclectic earworm of a song. At just under two minutes in length ` Indie Pop Verses The World` is a cracking slice of indie pop punk veering slightly towards the catchy tunes that the Ramones were famous for. I guarantee after a couple of plays you`ll be singing “I’ve got indie pop, it`s in my soul” for the rest of the day. There were some delightful what I took to be xylophone chimes throughout. A number that was on the band`s recent `I Can`t Face Driving to Stevenage` release.

We have a change of pace with the brilliantly titled `Going To Asda In My Mazda` which sort of chugs along with a drum machine beat, synth keys and vocals that sound like they`re shared through a megaphone by somebody whose ingested a bottle of Night Nurse. The pace picks up with `Devastation Duvet` which really reminded me of late Kirsty MacColl`s `There’s A Guy Works Down The Chip Shop Swears He’s Elvis` but less country but equally as catchy.

To me `Weekend Revulers` is The God`s answer to all those bands like The Happy Mondays, The Stone Roses, The Inspiral Carpets and Primal Scream. It`s their own unique and very danceable take on the British indie baggy genre. We have in `If Ya See A UFO Who Ya Gonna Call? Nick Pope! ` a song written in tribute to the world’s leading UFOlogist and former head of the Ministry of Defence`s UFO desk. Nick Pope has been described as the real-life equivalent of the X-Files’ protagonist Fox Mulder. A ninety second accolade that races along like Usain bolt down a 100 metre track in search of another Gold.

`Telstar Gurl` is a track ultimately about the band’s favourite Belgium pub and almost signing to Telstar Records before Victoria Beckham made them bankrupt. A number that wouldn`t be out of place in a Ramone`s setlist wedged between `I Wanna Be Sedated` and `Blitzkrieg Bop`. What would Johnny, Joey, Dee Dee and Tommy say, “Gabba Gabba Hey” i`m sure. We return to a slower grungier sound with `Survival Of The Shittest` which is in reality the band`s environmental ballad. A diatribe about all the damage we carry out through apathy and lethargy.

`Someone Else Is On Our Moon` opens with Gregorian chants and stroked cello strings on this quite reflective introspective galactic musing that had at times a sort of orchestral texture then veered off with an elongated guitar solo and harmonic chants of “la la la la “. Bizarrely beautiful.

The album closes with `Pickleodeons` seemingly a homage to pickles. A strummed acoustic guitar and vocals relaying enthusiastic deference to the mighty green cousin of a cucumber.

If you`ve never heard of The Pocket Gods this album would be no better a place to start to savour a taste of this lo-fi indie, electro-funk, and psychedelic pop outfit.  We have a rich and varied range of styles, speeds and storytelling that will raise a smile and your spirits and have you scratching your head with incredulity at times.

Open up and accept The Pocket Gods into your life, you know it makes sense.